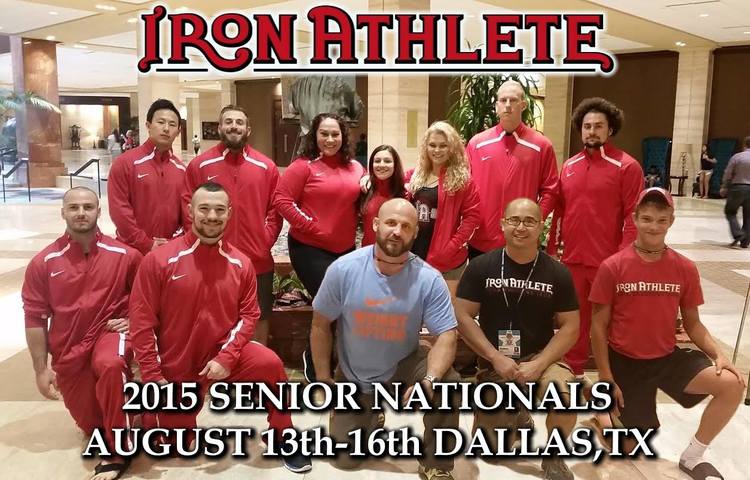 In Dallas, TX, the Iron Athlete team took on 2015 Senior Nationals. As the largest Nationals to date, it promised to be an exciting event.

Michelle Giannino came in looking to improve her performance from the Arnold, and she did just that, snatching 60kg and closing with a 73kg C&J. She finished in 11th place with a 133kg total.

Jenny Buckner started her Senior Nationals coming off a gold medal win just 4 days prior. With back to back meets for her this week, she went on to hit a 90kg snatch and a 110kg C&J to total 200kg. This put her in 7th place in a competition against the best in the nation. In the same session, OTC resident Deirdre Lenzsch put up big lifts as well. She snatched 96kg and hit a 115kg C&J to total 211kg. Deirdre’s performance was good for a Silver medal in the snatch, Bronze in the C&J, and Silver Overall.

Brand new to the team, 16-year-old Bret Pfeiffer started off the snatch well, making his first two attempts at 85kg and 88kg. He narrowly missed his third at 91kg. He closed out the C&J session at 108kg. Bret got under 112kg, but unfortunately was unable to stand up with it. With a 196kg total, Bret finished in 10th place in the 62kg class.

Alex Lee showed up this weekend with a passion unlike anything I have ever seen before. Unable to post a total at the PanAm Championships earlier this year, Alex was hungry to earn a top spot at this event. Alex battled with CJ Cummings in a fierce competition. The two went back and forth, trading places between snatches and C&Js. Alex was able to end his sessions with a 128kg snatch and a 172kg C&J, but ultimately, CJ overtook him with his final lift of 175kg on the C&J. This was a new Senior C&J American record as well as an unofficial Youth World Record. On behalf of Iron Athlete, congratulations CJ!

First time National lifter Danny Lazzeri came to Dallas hoping for big numbers. Although his lifts looked strong and easy, he faced some stiff judging and was only credited with his openers at 120kg and 150kg for the snatch and C&J portion respectively. We foresee big improvements as he gets more experience at National events.

Jason Lewis was able to close out his portion with a 145kg snatch and a 175kg C&J. He was only able to make his opening weights, however, he was able to secure a top ten spot in doing so, placing 8th in his weight class.

Anthony Pomponio and John McGovern competed in the 85kg class– not just as teammates but as friendly rivals. John showed some struggle with his snatches while Anthony similarly pushed the limits with the C&J portion. Both narrowly made their 3rd attempts to stay in the competition. In both cases, the struggle paid off, and they were able to take the Gold (Pomponio) and Silver (McGovern) overall. Anthony swept the events with Gold in both the Snatch and C&J. John was able to secure the Bronze in the Snatch and Silver in the C&J.

The 94kg class was stacked, as always. With four men within striking distance of the World Team qualifier, the competition was intense. Sunday proved this was the class to watch. Norik Vardanian was able to Snatch 160kg, and on any other year, this would have likely brought home a medal. In this past year, however, the Snatch American Record has been broken numerous times. While Norik was the American Record holder last year, this year’s distinction went to Jared Fleming as he went on to snatch an impressive new American Record of 170kg. Congratulations, Jared!  For the World Team qualifier, Norik needed a 208kg C&J following the snatch portion in order to secure a spot on the team. However, he was unable to do so and he will be making one last attempt to secure one of the two leftover spots at University Nationals this year.

Norik will be joined by Alex Lee and Deirdre Lenzsch as they all venture to Utah in a few weeks to vie for the remaining available spots on the World Team. Some of our newer and younger team members from Arizona will also accompany them to get some good experience competing at a National level meet. Look for them in Utah soon!