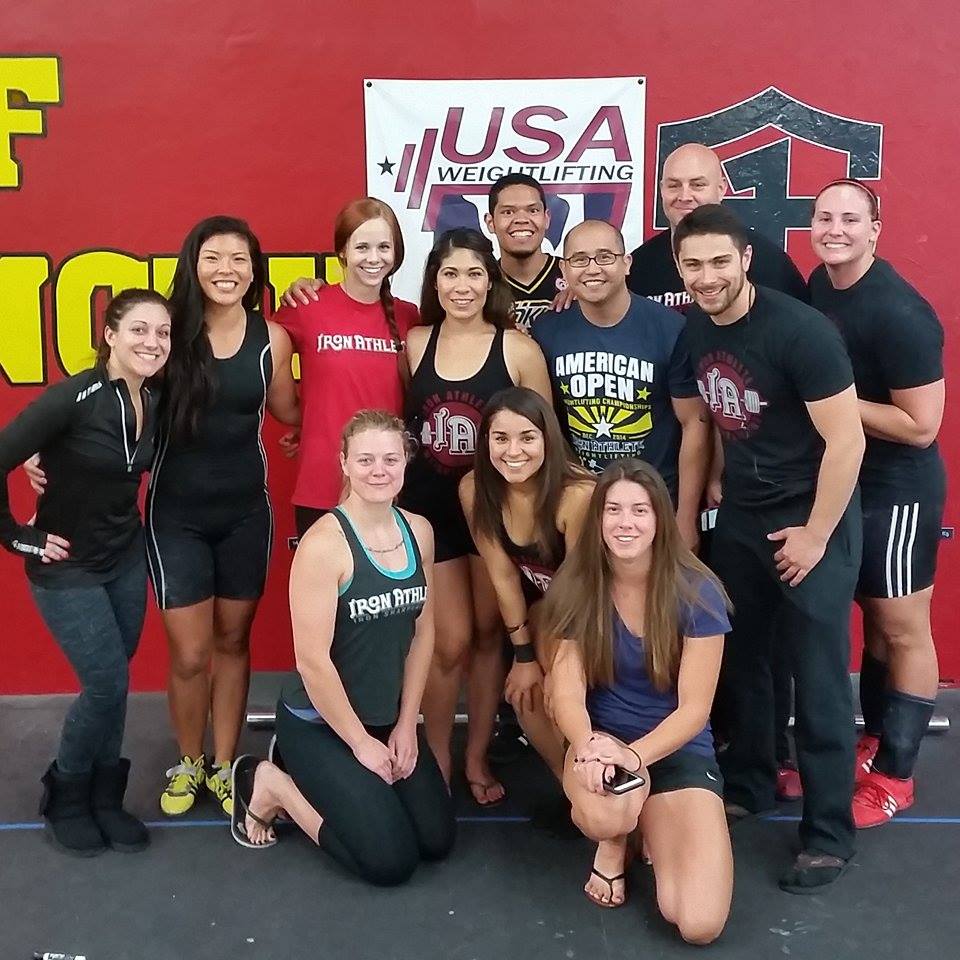 April continues to be a busy month for Iron Athlete.  After returning from Masters Nationals, Coach Jeremy Galo took a team of lifters down to Tucson this past weekend to compete in the Tucson Barbell Club Open hosted by Danny Sawaya of Evolution Fitness.  The meet sold out quickly when registration first opened, and we could see why.  Weightlifting in Arizona is booming. More meets continue to pop up almost monthly, meeting the needs of multiple athletes and multiple gyms, with clubs sharing the responsibilities in running meets.  Iron Athlete participated with Sabrina (Bri) Petit judging sessions and 2014 Nationals Snatch Bronze medalist Michelle Giannino running the cards along with emcee duty.  As the weightlifting community grows, we see more gyms helping others to put on high quality events.

In the 58kg class, Stephanie Espinoza snatched 50kg and C&Jed 71kg, finishing with a 1kg meet PR Total.  More impressively, Stephanie had cut down a full weight class from 63kg, and was able to increase her strength and improve her technique in the process.  Teammate Liz Stuart had been battling some sickness the past week and a half before the meet and had not been able to train.  The week before the meet, she was only able to train light.  As soon as she got to the platform, though, Liz continued the charge for the ladies, hitting a 58kg snatch and 65kg C&J. She took third place in the 58kg class.  They will both come back strong after this meet to qualify and compete for University Nationals.

In the 69kg class, Alana Carrasco and Elizabeth Zapata continued to lift strong for the team.  Alana hit a PR 61kg Snatch on her final attempt and a 73kg C&J to take 2nd place.  She is making big gains in her speed and technique and will hit bigger numbers soon.  Elizabeth joined our club a few months ago and she is showing great promise.  She started off the blocks strong and finished even stronger with a 6/6 performance, snatching 63kg and C&Jing 80kg.  She was able to qualify for University Nationals with that total, and we expect to see much better numbers from her as her consistency and technique continue to improve.

In the 75+kg class, Samantha Maxwell continued to dominate with a great performance.  For this meet we didn’t aspire to hit lifetime PRs. Rather, we focused on lifting heavy up until the meet. Still, Samantha was still able to hit meet PRs on both Snatch and C&J with 73kg and 91kg respectively.  Her consistency and strength continue to skyrocket and she will lift bigger numbers as she prepares to lift at University Nationals later this year.

The Iron Athlete men did not disappoint either.  Masters lifter Rusty Mixer was able to hit substantial lifts in the warmup room.  He hit the competition platform strong and pulled another big 6/6 performance in his second meet.  Snatching 92kg and C&Jing 120kg, he finished the day with PRs in both lifts, taking first place in the 105+kg Masters class.  Richard Gutierrez finished out the Iron Athlete roundup with a big 10kg meet PR in his snatch at 105kg.  This was also a 5kg lifetime PR for him.  While his 120kg C&J was not his best, he still continued to finish with a 5kg meet PR Total.  As his legs get stronger and he continues to fill out his bodyweight for 85kg class, he will put up even better numbers as he trains for University Nationals.

Iron Athlete would also like to congratulate some lifters who qualified for the American Open this year.  Kelsey Bennett made some big lifts and took best female lifter, snatching 57kg and C&Jing 75kg as a 48kg lifter. James Ellis took home best lifter with a 6/6 performance and setting meet PRs with a 126kg snatch and 160kg C&J.  They will be competing in the American Open in Reno later this year.  Brandon Wright qualified for the men’s 77kg class, lifting 101kg and 131kg in the snatch and C&J respectively.  Chris Gartrell wrapped up the list of American Open qualifiers with a 235kg performance.  This was his first meet in a while and the first time he has coached a meet without his best friend and partner, the late Samantha Silverman.  We know Samantha was proud of his performance as a great lifter and even better coach and friend.  May she rest in peace.

Big thanks again to the Evolution Fitness crew for hosting a great event.  We will see you all again at future meets!