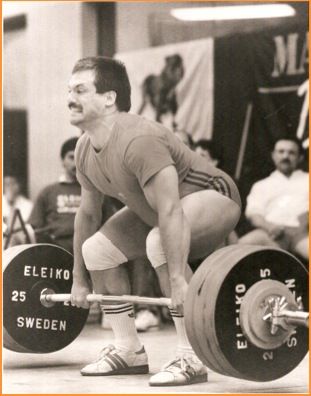 Derrick Crass, founder of DC Blocks, is a 2x Olympian. He is also trained as a physical therapist and a physician’s assistant.

Am I correct in that you began your weightlifting career at age 16? Did you have an athletic background before that? How did you come to find weightlifting?

I’ve been playing sports since about the second grade—initially mostly baseball. In junior high I did track and things like that. I was fast; that was always an asset of mine. In high school, I started playing football. The school had a weightlifting program. This was back in the mid-seventies. The training was mostly half squats, bench presses, etc. Based on what I was reading at the time—like, Strength & Health Magazine, Iron Man Magazine – the program seemed like it was for bigger, slower guys. I learned about the clean and jerk and the snatch by reading, and I asked my dad if he knew anyone who taught those lifts. He’d actually gone to high school with Ted Frank, who was a national level lifter. So, my dad took me down to the Belleville Weightlifting Club. I learned the clean right then and fell in love with the sport.

You have a pretty incredible story of injury and recovery between the 1984 and 1988 Olympic Games. Can you speak a bit about what happened and how you came back from such a devastating setback?

In 1983, I was training like a madman to make the ‘84 Olympic Games. On my third repetition with a 185kg clean and jerk, I came out of the bottom and I felt incredible back pain and shooting pain down my legs. I went ahead and jerked it. When I went back to rest, I couldn’t get back out of the chair. It turned out that I fractured my L4 vertebra and ruptured the L4-5 disc. They put me on prednisone as well as valium to help deal with the pain. I weighed 82.5kg and was taking 85mg of prednisone for a year. While the pain was tolerable, it never went away. Meanwhile, I was developing Cushing’s syndrome.

Before the ’84 Olympics, I had been doing well, but about two months out, things kind of fell flat for me. I got a knee injection right into my tendon eight days before lifting in LA. I later found out that that’s the exact wrong time—between 7-9 days is the worst time to put strain on the tendon after an injection. I blew my patellar tendon in the snatch. The bar came straight down and it took my right elbow with it. With my elbow dislocated, everyone who ran out was focusing on my arm, and I was like “No, it’s my leg!”

At the end of ’84, I had a long leg cast and a right arm cast. After a few weeks in early ’85, I started the rehab process. I figured that I had just retired, but I still had my buddies at the Belleville Weightlifting Club. I got my full range of motion back, and I just went in to support my team. I competed, but I wasn’t worried about the numbers. I enjoyed it. I kept at it. At the end of ’86, I realized that what I was doing for triples would put me in third place in the country for my weight class. With that, I decided to try and qualify for nationals in ’87. I won my first nationals in ’87 (which you might imagine put new strain on my family since competing wasn’t part of the deal). But, I competed, and I moved up from there. I had my sights set on the ’88 trials.

I still had a couple small surgeries in there because my elbow was sloughing off bone chips periodically. I’d have a good long block of training and then get surgery, be out for a few weeks, and get back at it. There were rumors that I was avoiding drug testing, but I was having surgery. I made the ’88 team, and then I went on to the best part of my career. I got my lifts back, up to 155kg and 195kg and then even higher.

When did you develop a career as a physician’s assistant and physical therapist? Have you found many interrelations between your medical expertise and your involvement in the weightlifting community?

I was a cop during my lifting years in Belleville. After I retired from the sport in 1992, I was accepted at Wash U for the physical therapy program. I graduated in ‘94. I went back to school again in 2011, and graduated as a physician’s assistant in 2013. Now I work in orthopedic surgery and in physical medicine and rehabilitation—basically spine and neck and joint pain.

It’s sort of come full circle. I became a PT because I wanted to help prevent people from going through everything I went through. Having gone the PA route, I’m now trying to get even more involved in the weightlifting community. I’m trying to combine the knowledge I have as an athlete and as a medical professional—I’m not going to tell people that they shouldn’t lift or question why they want to. I can talk to people about how you safely increase loads and work on technique.

I’m actively building some courses that I’ll be offering soon. I’m hoping to reach out to the weightlifting and CrossFit community. People won’t have to be afraid that I’ll tell them to just stop lifting. We can figure out what the problem is and make adjustments. If they’re injured, we can figure out how to work around it.

In terms of movement correction, is there any issue that you see fairly frequently?

Well, it’s probably an oversimplification, but… as a general thing, I would say that many folks tend to use their upper body more than their legs. At least with Americans anyway. When you do that, you put your back at risk.

So, I used DC blocks for the first time at EVCF in Arizona. I’d never seen anything like them—that were lightweight yet sturdy and versatile. When did you get the idea for them, and how did you get started with production?

Thank you for the compliment and the nice words. Way back in the OTC in the 1980s, we did train on blocks quite extensively. Based on what I’ve found, people started using boxes for training around the late ‘50s and mid-‘60s—in the eastern bloc countries and Scandinavia. At the time, they used solid wooden blocks, like 12x12s cut to about a foot and a half in length. You’d stack two of them for a high block and use one to get the bar to your knees. You were taught to set the weight back down. The blocks didn’t interlock so if you dropped a weight or if you missed a lift, you’d have to dive out of the way to avoid the bar and falling blocks. That’s just how it was. Then some companies started making wood blocks that interlocked with pegs. I made some blocks of my own, and I had my dad make some iron blocks, which were about a million pounds.

When I was coaching more, I began using blocks more frequently and got reacquainted with how heavy they were and how difficult they were to move, and how they took up so much space, etc. I had seen Mercedes Dickerson with these Hitech plates – she worked for Lawrence Livermore Laboratory and had designed these plastic weight plates from recycled materials. So, I made a wood mock-up of what I envisioned and took a few of them out there to Lawrence Livermore. I met with their engineers and we came up with an initial design. I made them lightweight so that anyone can use them. They’re just 2” tall each so they have pretty good adjustability and they have a small footprint. Plus, they’re made out of recycled plastic!

With your weightlifting background and your physiological expertise, can you speak a bit about the different advantages of training with blocks?

They can be used for teaching technique and also for power development, so there are applications for athletes from beginners all the way up to elite competitors. For beginners, I really support a top-down approach—well, a “whole-part-whole” top-down approach. By that I mean, you start by teaching someone what a full lift looks like so they know where they’re going. Then, you quickly go to starting at the top. You teach the technique beginning with the power/high-hang position. Almost anybody can do a high hang shrug, so it’s applicable for so many trainees. From there, they can just extend and shrug. You can hold that position for a balance check. Once they learn that, you can teach them a high pull for the bar path. Then, you teach them to put the bar overhead. After that, you can move to an overhead squat or a front squat for a full lift from the high block position. Next, you’d move down to the knees. I’m a fan of putting the bar right in the middle of the patella. Some people go a bit lower. Then you bring it down to the floor.

For mid-career athletes, blocks can give them a lot of exercise variation. You can target specific movements, and/or mix up their training to keep things fresh. For high-performing athletes, you have the overload principle. You’re in a mechanically advantageous position when you lift higher from the floor. You can actually load the body more to train that position and eke out more strength and power.

Has someone come up with a use for DC blocks that you didn’t think of before?

We have a hashtag, #101usesfordcblocks. Dan Hornbuckle, an MMA fighter, he happened to be taking blocks from the gym to his home and he got a flat tire. So, he pulled off to the side of the road and used the blocks to support the jack for his car. That was the first weird use.

I also remember a girl was doing leg presses with a tire. She’s an athlete coming back from an ACL injury and her gym didn’t have a leg press machine, but they had an 800lb tire. So, they put 2 stacks of DC Blocks up so that she could get underneath the tire and do leg presses with it.

There are also power stairs, belt squats… what I’m seeing a lot of is—well, it’s kind of like a front lunge, but elevated and with a load, and you drive the back leg up. I’m putting all that stuff together for a clinic that’ll play off the “101 uses” to show people what more they can do.

What are you working on now? What’s on the horizon for you?

Actually, I’m getting ready to take this poster to the printer for training with the blocks. I’m also working on a related manual, and I’m collaborating with a professor down at the University of Puerto Rico to get this translated into Spanish so we can take it to South America and the Caribbean.

I plan on doing clinics on how to lift with the blocks, and also on “101 uses for DC blocks” (we’re toying with the idea of calling them “block parties”)—they’ll be one or two-day type things. People can also get certifications, or even more importantly CEU – continuing ed units – with that.

There’s a way to contact me through the website; they can fill out the contact form. Pretty soon, we’ll also have the poster and the book out.