Could you speak a bit about your athletic background and how you came to CrossFit:

Prior to CrossFit, I was an endurance athlete. I ran 5ks, 10ks, and I was on the track team for Kent State University from 2000-2004. I had that “more is better” mindset and never allowed myself the freedom to rest and recover. Over that time, I acquired a lot of overuse injuries, which eventually led me to a chiropractor who provided a lot of relief for me.

Up until then, I had wanted to be a high school cross-country and track coach, but I also didn’t want to spend a lot of time in a classroom. I wanted something that allowed me more movement, and I wanted a job that I loved. I wound up going to a chiropractic school. In 2007, while still in school, I came across CrossFit. At the time, I was steeped in the world of endurance sports. I’d completed a marathon in 2005 and several half marathons. I’d qualified for the Boston Marathon. CrossFit, though, opened up this whole new world of fitness. I’d done some weight training before, and I’ve always had this curiosity to explore what my body is capable of, and CrossFit really gave me the opportunity to fulfill that hunger. I’m coming up on 10 years in the sport now, and I’m still making gains. Especially since I started training at East Valley CrossFit, my strength numbers have been coming up again. I’m 35 years old now, and really excited for the upcoming season.

How has your training evolved over your time in CrossFit?

When I first started training, I still had the distance running and endurance athlete mentality— thinking there’s no way that just squatting and some short, high intensity exercises can burn enough calories. I don’t know if you remember, but Mainsite used to post these “pain storm” workouts once or twice a month. They were just 40-60 minutes of long, grinding work. I’d gone through all the back history and pulled out all the posts, just playing around with a lot of different movements.

In 2009, I decided to go to the very first Regionals that they held. I was an affiliate owner at the time, and I had a lot of fun. There were a lot of bodyweight activities—pull ups, box jumps, burpees. There were like 36 women who signed up. There wasn’t a qualifier or anything, just like, “Hey, who wants to come to regionals?” I wound up finishing in 9th place. There were only 9 of us who qualified for the final event. I remember 35lb KB thrusters with burpees. Those 35lb KBs felt so heavy. The final event was “Grace,” a 400m run, and a light “Isabel.” So, thirty clean and jerks at 95lbs, run 400m, thirty snatches at 75lbs. At the time my 1-rep max snatch was 83lbs. I finished dead last, going one rep at a time. 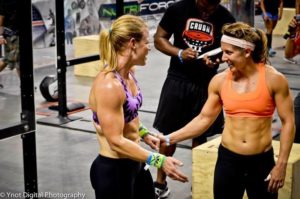 That was a big breakthrough moment for me. As a runner, I hadn’t handled losing very well. At that competition, though, I finished dead last and was able to be proud of what I could do—to understand that we’re all on our own journeys, and all we can do is move forward from where we begin. That realization was important for me. As an affiliate owner, I wanted to be a role model—not someone who came out as a sore loser.

After that, I began doing more strength work. In 2010, I wound up winning the final event at Regionals. There were snatches in that workout too. This time, they were 85lbs. Obviously, I’d gotten stronger, and it was really rewarding to be able to see that change and to win against some of the Games athletes.

I started working with James Fitzgerald out of OPT from 2011-2014. I then worked with James Taylor and Robin Lyons (both OPEX Coaches) before taking over my own programming at the end of 2015 through 2016 Regionals. After that, I took more time out of the gym than I ever had before starting CrossFit, and I was even questioning if I still had the passion to keep training and competing. In July of this year, I met with August and started working with him, following the Competitors Training at East Valley CrossFit. It’s been great to get back to the group setting and the team environment that CrossFit provides.

How has CrossFit itself evolved over that time?

The most impressive thing is the level of skill that people have developed. What used to be elite is now commonplace. I went to a competition at CrossFit Inferno this weekend and was really impressed at the level of general fitness. As the community grows, too, it’s also awesome to see people of all ability levels and ages and backgrounds come together and make progress.

Am I right in that you also have a background as a doctor of chiropractic? Has that influenced your approach to training and coaching?

Definitely. That is why I’ve generated the clinic that I’m doing through Iron Athlete. When I watch people train, I see it through probably a different lens than most. I tell my own coaches—I don’t want to be great for the next 16 months and not be able to work again. I want to be able to do this for my entire life. I know that to compete at a high level, you must push the edge of that, but I look at establishing integrity of the musculoskeletal system and building a good foundation for the joints. Part of what I see still missing from the conversations in CrossFit is how to build a base—how to be able to confidently and safely do all these skills long-term. For example, with butterfly pull-ups, you’ll often see a jarring movement in the athlete’s shoulders. Eventually those movements will chip away at the tendons, and that’s how you end up discovering rotator cuff or labrum tears.

Before we get to butterfly pull-ups, then, we need to step back and take a look: how many strict pull-ups and how much eccentric work does this athlete do? How much has he done to develop the integrity of the tendons and the joints as a whole? There are actually formulas to find optimal strength balance for a shoulder—how many pull-ups you can do vs. dips; upright rows vs. presses. I use those as check-ins with people to see if they’re pull or push dominant. As human beings, we’re always compelled to train what we’re good at. Me, I’m a really good puller, so I was spending more time deadlifting than squatting. To avoid injury, though, we need an overall system that is much more balanced. If you’re significantly stronger in one range of motion than another, it’s going to change the rotation of the joint and how the stress distributes around the joint.

I had a clinic in North Carolina and my focus was on movement quality—not just putting a bandage on the problem with soft-tissue work or an adjustment, but asking what actions you can take to not be in chronic pain. I worked to very gradually increase individuals’ work capacities. I had this one gentleman who came to us with a full hip replacement on one side, and he was going to get a replacement on the other hip. After working with us, though—a four-year progression—he was able to do a full squat, below parallel, at bodyweight (around 200lbs). That was huge for him. Being able to improve quality of life like that—through independence, confidence, and competency—with strength and conditioning principles, that’s what CrossFit is to me. I’ve heard people say that CrossFit is “not for them” – and yeah, maybe a group class is not for everyone. Applying strength and conditioning in a way to optimize movement and quality of life, though, that can be for everyone.

What are you working toward now as an athlete/coach?

As an athlete, my primary goal is improving my overall strength while refining my skills. I’m also working to embrace the “suck zone.” I used to always talk about how I “don’t like to hurt” and want to be fit enough to be competitive without suffering. More recently, I’ve been working on moving into the space of discomfort to actually discover what I am capable of. In the past, I’ve had the experience of finishing a workout—tired, but y’know, still fine—and watching others fall over… and I wonder what I would be capable of if I pushed myself to that limit. I want to know what I can do if I get my head out of the way. Every once in a while I’ve gotten myself to a place where I attack, but not often. It’s very much my endurance background—I pace. It’s a good thing, sometimes, but can also bite me in the ass.

As a coach, well, I do a lot of mindset coaching for my work—with people from all walks of life. I’ve also been able to fit in a few classes and personal training sessions in the gym. What I’m really passionate about is spreading the knowledge I have about working with chronic injury and deconditioned individuals. In my clinic, we had people in their 80’s doing strongman-type exercises. These people are fully capable of running around with their grandkids and throwing them over their shoulders. I’d love to see more people becoming more physically competent as they age—able to have a high quality of life through the end of their lifespans. I want to empower CrossFit affiliates by giving them the knowledge they need to have programs that can address folks who might otherwise be dissuaded from strength and conditioning. How do we create an opening for these people to even consider that they can have fun with their fitness? How do we rewrite the stories of whatever they’ve dealt with in terms of gym class or sports or feeling out of place and incapable? I believe that, as humans, we all have the desire to perform, but that it isn’t awakened in a lot of people. If I could do anything in life, it would be to move people to action—to empower them to live with vitality.

Where can people go to follow you—websites, social media, etc.?