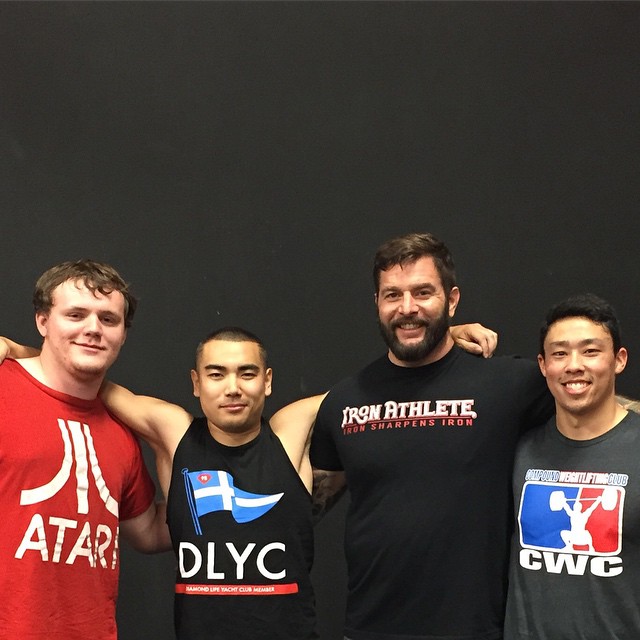 For those who might not be familiar with your weightlifting career, would you mind summing up how you got into weightlifting?

When I was about 12 or 13, I lived in a small town and got in a lot of trouble. My grandmother suggested that I go to the gym for some guidance. She was involved in Hollywood in its Golden Era. She was convinced that if I got in shape, I’d be a big, famous movie star. I was already kinda big as a kid and she was terrified that I’d be fat… and miserable and unhappy for it. So, she got me membership at a local health club.

In the back room of this club, there were three platforms, and a guy named Steve Gough who was a student of Jim Schmitz. He coached a bunch of young kids, and they all seemed really tough and cool and strong to me. On the walls, there were pictures of them competing in local Junior Olympic meets. They all walked around with a sense of pride that I’d never seen in kids my age—all I’d done up until this point was party and steal shit and get in fistfights.

The thing about Steve Gough—he’s very motivational. I’d only been in the room for three minutes and knew I wanted to be around this. At the time, one of my best friends was already lifting weights with the Fairfax Weightlifting team, so I had an in. It became sort of like having a gang, being around all these other kids. It helps having a gang of kids when you have a nowhere else to be—and it doesn’t hurt when that gang is full of the biggest, strongest kids around. The Fairfax Weightlifting Team eventually grew into the Marin Weightlifting Team. It produced quite a few high level people, not the least of which was Tom Gough, Steve Gough’s son and a two-time Olympian.

How long did you train under Steve Gough?

My entire career. Though, after six years with him, I was invited out to the Olympic Training Center. I jumped at the opportunity. In that time, I went to train with Dragomir Ciorslan and was fortunate enough to become part of the most prolific and successful resident program to date. I wasn’t by any means a superstar, but I was really proud to be a part of that program and that energy.

What was so special about it?

Don’t get me wrong, today’s resident program is on fire. Here’s the thing about when I was there: Recently, I was out in London for the Olympics and I met up with Dragomir and he introduced me to someone as a member of the “romantic era of the resident program.” I was part of the second group of athletes that had ever been out there. America hadn’t had anything like this before. We’d never had a foreign coach, and the professional weightlifter lifestyle had evaded the American subculture of weightlifting.

There was no weightlifting program until the resident program. No one knew what the Europeans were doing. Then Dragomir showed up and literally everyone who went out there made gigantic gains in their first year. It wasn’t like he was just taking beginners and developing them. He was taking everyone and putting enormous numbers on their totals.

Back then, we had a shitty gym. I mean, we called it “the dungeon.” It was a shithole. The dorms that we lived in—I was 300lbs and the other guy was 300lbs, and we squeezed in 8ft x 8ft. Now they have suites at the OTC—and they deserve that.

Anyway, a lot of legends of American weightlifting came out of the program from when I was there. It built this sort of dream team. I mean, I’m not a legend by any means, but I was really lucky to be a part of that.

What took you from that to coaching?

The short answer is that I’m still chasing my Olympic dreams. I never made the team. I got as close as I could get, but I’m still in love with this sport. I don’t begrudge any of my experiences—good or bad. All of it has been fantastic and continues to be. But now, I’d love to put someone on the Olympic team or be involved as a delegate or something.

If you’d asked me as a kid what it looked like to be rich, I’d have said hanging out in the gym all day and talking shit with my friends. And now I’m not rich, but I’m doing what I love. I’m the biggest weightlifting fan you will ever meet. I left the sport for a couple years and just found myself back in the gym all the time.

Then CrossFit came along.

Here’s how I used to look at weightlifting: I used to tell everyone—friends, family, etc.—“You guys gotta try this. There’s no other workout like it. It will hit your whole body. You don’t have to do this other stupid crap.” But I was also a 280lb teenager, and no one wanted to look like me. I was like, “No, I’m just big! Here, let me show you these other guys…” But no one listened to me.

Now I can go into a supermarket and find a middle-aged woman wearing a shirt that says “I snatch.” So it’s really cool for me. It’s this thing I’ve been a part of—I’ve been a part of this for 30 years—and now I still get to be involved and watch it grow, all the while still in the gym coaching and still talking shit with my friends.

How did you meet and begin working with Jon Andersen?

Jon was one of those people I was just telling you about—who wasn’t interested in weightlifting when I was going on about it. Back in about 1995, some friends of ours brought Jon to the gym because he’s just incredibly strong. He’s one of the most naturally gifted athletes I’ve ever known, but at the time he wasn’t interested in weightlifting. So, he came around, but he worked on strongman events and powerlifting.

After the 1996 Olympic Trials, I stopped competing. Jon called me because he’d gotten a pro card for strongman, and he needed to learn the Olympic lifts. He told me he was looking for a training partner, and that he could help me with my fitness goals. I’d moved away from weightlifting and gotten into Jiu-Jitsu, and he’d had a wrestling background, so we just started training together. Jon had this really unique training style that incorporated Olympic weightlifting, powerlifting, some martial arts stuff, some wrestling, and he’d mix that up in a workout—sound familiar? But this was years and years before CrossFit. We’d work out three days a week: Two days weightlifting, one day strongman, and the opposite of that the next week. I got in the best shape in my life like that.

It’s funny. We’d do workouts like, 10×10 power cleans every two minutes with bodyweight, and I try to tell Jon that’s absurd. You don’t do that. But we’d do it and somehow survive. We’d do these ungodly workouts. I’d tell him you don’t snatch for multiple reps because it doesn’t work like that and you’d hurt yourself. But, we trained like that for years, and it did work like that. Jon also became a pro wrestler. I stayed his weightlifting coach, and he was my “barf” coach, as I called him.

We called it “Deep Water” training at the time because, with every workout, we devoted ourselves to not saving energy for the swim home. We’d say, “I’m taking you out to the Deep Water today.” When CrossFit came along, I was like “Holy shit, it’s like training with Jon but with light weights!”

Now, Jon is now a three-sport pro. He’s done strongman, pro wrestling, and now pro bodybuilding. Jon’s so weird in that he’s never prepping for a show—or rather, he’s always already there. He’s actually that guy 24/7/365 days a year. Even all the people who are in his field—they all taper and take breaks. Not Jon.

Do you have specific goals that you’re working towards now in your professional career?

I’ve got a great junior team right now—a couple young studs who with time can really do something as long as they stick with it. I’m looking forward to seeing what they achieve. I want to continue to train people and learn and travel. I’m also doing some online coaching. Oh, and I wrote a book, The Deepwater Method, which you can find online.

Where can people go to find you? [websites, social media, etc]

You know, it’s funny, I’m sitting in front of my computer and I’m about to buy a website: www.stronglikebull73.com. That’ll be up soon.

Jon and I also have www.getprotrained.com.

I also did a podcast for Tom Lower (The Commissioners of Power). We touched on some of the same things you and I just discussed here.