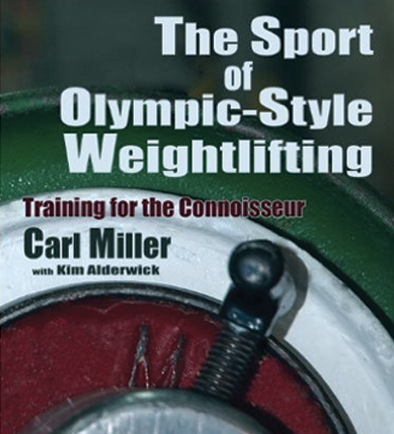 The Sport of Olympic-Style Weightlifting by Carl Miller

“The Sport of Olympic-Style Weightlifting” provides the athlete with a comprehensive review of the critical elements that mold a champion. Winning isn’t simply about lifting technique, eating the right food or visualizing lifts.

This book consolidates Carl Miller’s extensive knowledge gained while pursuing his life’s work in Olympic-style weightlifting. There are scientific principles behind Olympic-style weightlifting, and Miller’s 50 years of lifting, researching and coaching provide valuable insight into the process of Olympic lifting. Whether you are an advanced lifter or a novice, Miller equips you with the tools to become a champion, even if it’s in your own mind. For those lifters with the desire to compete, Carl’s book will inspire you to immerse your body and mind in the intricacies required to be a winner.

Miller’s success as a young weightlifter led him to a long and unique career coaching weightlifting, fitness and nutrition to elite athletes in the 1960s and 1970s, and later he spread his message about the benefits of weight training to a wider audience. As Coaching Coordinator for the U.S. Olympic weightlifting team, Miller put into practice many methods and techniques he gleaned from studying successful international lifting programs. The U.S. Olympic weightlifting team under head coach Tommy Kono won a record number of Olympic medals using assistant Olympic coach Carl Miller’s coaching system. He gathered the best lifters in the country, had the best coaches in the sport, and introduced new lifting techniques to elevate the U.S. lifters to contenders. Carl Miller has dedicated himself to analyzing and tweaking the techniques of Olympic lifting.

During the 1970s, in addition to his duties with the Olympic team, he was a National coach, World coach, elementary school teacher and vice principal. As a teacher and vice principal Miller developed physical conditioning programs for the kids in his school. During his 30 years, and still counting, as founder and co-owner of Carl & Sandra’s Physical Conditioning Center, lifters seek out Carl, his son Shane and staff for Olympic-style training. Carl & Sandra’s Conditioning Center stands apart from other gyms because Carl Miller’s philosophy revolved around the benefits of weight training long before it became popular. He weaves the hundreds of tiny components of Olympic-style weightlifting into beneficial fitness programs for gym members with a wide variety of profiles, and at the same time, his Conditioning Center trains a team of nationally competitive masters Olympic weightlifters.

“The Sport of Olympic-Style Weightlifting” provides the athlete with a comprehensive review of the critical elements that mold a champion. Winning isn’t simply about lifting technique, eating the right food or visualizing lifts. You will discover the importance of body levers and the nuances of adjusting for your own unique body measurements, you will learn the finer points of planning the different phases of your training, you will be enthralled with the diverse programs available to incorporate in your routines, and you will grasp how your mind contributes to your accomplishments at critical points along your trajectory

There are no reviews yet.