This is Bulgarian legend Alexander Varbanov hitting a world record 215 kg C&J in the 75 kg weight class at the World Championships in 1986. Varbanov is generally considered one of the best clean and jerkers in the history of the sport.  His top results from the 1980s have still not been equaled in the approximate same weight classes 30 years later. One of the most interesting parts of Varbanov’s technique is how hard and fast he ripped the bar from the floor, right from the instant he began his pull. Many weightlifting coaches teach their athletes to pull the bar from the floor with a more controlled, moderated level of speed (poor coaches overdo this idea and actually tell their athletes to pull excessively slowly).  Very few coaches teach athletes to rip the bar from the floor as fast as possible because the athletes will usually not be able to maintain the right level of back tightness, balance, and position if they do it this way.  But like Yuri Vardanian, Varbanov was an athlete who could do things almost nobody else could. Interestingly enough, most of the other Bulgarian champions from this time period also ripped the bar off the floor as fast as they could.  It was part of how they were taught.  And knowing the level of success they had, does this mean all athletes should pull the bar from the floor as fast as possible? The answer is no, because not all athletes will be able to maintain proper position and balance if they accelerate that early in the lift. Beginners have to learn to walk before they can fly. However, there’s nothing wrong with going back to the old rule many coaches have taught over the years, “You want to pull the bar as fast as possible from the floor while still maintaining proper positons.”  That sentence has to be understood as a whole. If the athlete’s speed from the floor is causing technical trouble, he/she needs to slow it down a little.  However, if the athlete can rip the bar from the floor as fast as Varbanov while still maintaining perfect positions…then by all means, rip away! 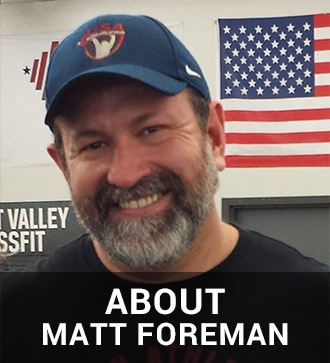 Matt Foreman has been involved in Olympic weightlifting since the late 1980s. After beginning his competitive career as a junior athlete in Arizona, he was recruited to join the Calpian Weightlifting Club in Washington in 1993. Learn more about Matt