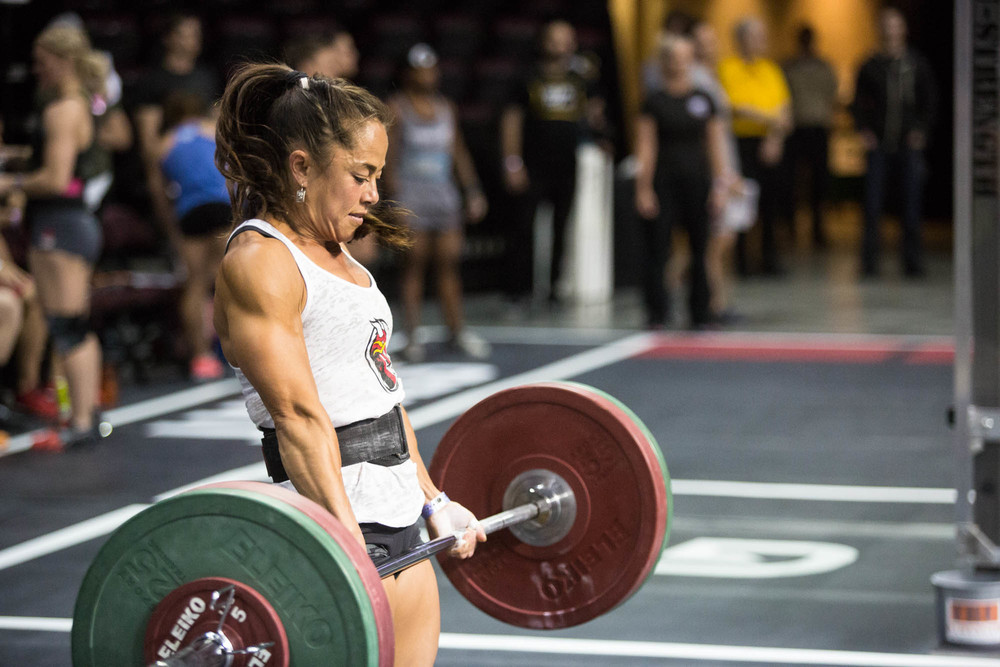 I’ve enjoyed every one of the interviews I get to do through Iron Athlete, but some of them have personal significance for me. I’ve looked up to Annie Sakamoto since I started CrossFit. I remember watching her fight through the Killer Cage workout at the 2011 Games and being moved by her tenacity. I was thrilled that she took the time out of her busy training and life schedule to let me pick her brain. For those who don’t know, Annie is a CrossFit legend — a 2x Games athlete and 5x Regionals competitor. She won the 2011 “Spirit of the Games” award, is a member of the NPGL San Francisco Fire team, and Co-Owner/Founder of CrossFit Santa Cruz Central. Read on for Annie’s thoughts about competition, the Games, and her past and present ambitions.

As one of the original CrossFit athletes, you have a long and impressive history in the sport. If you could pick one of your most powerful memories as a competitor, what would that be?

In the 2011 Games there was the “Killer Cage” workout—with the monkey bars and the watt bike and the 155lb front squats. I had been doing pretty well all weekend—better than I’d anticipated. During that workout, though, all the other girls had finished, and I was left alone, still going. I remember really struggling on that workout. Everyone was done and it was just me and the clock. I really just wanted to stop. I knew all the eyes and the focus was on me.

Every inclination in me was just to stop, but I didn’t. I gutted through as much of that workout as I could before the time cap. That remains a highlight for me—wanting to quit, wanting to duck away, and not doing it. There was obviously a lot of dialogue in my head about dropping the bar and walking away, but I think, inherently, as CrossFitters, we’d rather die trying. And part of being a competitor is giving the most you have in that moment rather than always coming out on top.

You pack a lot of power despite being one of the smaller athletes (though I’d expect size is one of the factors that made the Killer Cage so difficult for you). Do you have any advice for other athletes of similar stature for how they can make the most out of what they have?

I think, for us that are smaller, technique is paramount. You can’t rely on size to muscle through. For me, I have to move as well as I can through everything or I’m going to end up broken. Especially as an older athlete, that’s true. I really try to think about CrossFit in terms of longevity. That’s not say that I have perfect form, but the more I can focus on form and gaining true strength and not worry about the numbers on the training side, hopefully the longer and better my career will be.

I was lucky to start early on in CrossFit (in 2004), and to be involved in a lot of the community as it was building. I worried that once the Games started, the community would have an expectation of how I would place. And, I would have expectations for myself as well. Those expectations held me back because I didn’t want to know where I might measure up—I was really nervous about letting people down: what if I wasn’t as good as others thought? But, I realized these were only my own expectations. The community wants to see you participate. They only care about you being a part of it, giving your all.

In 2011, the owners of our gym wanted people to do the Open—that was its inaugural year –and I was kind of reluctant. I had a lot of excuses—things about how dangerous it was or could be, what happens when form falls apart—but it boiled down to my own nervousness.

In the end, I did it. I wound up making it to regionals, which I didn’t want to do. Again, I had those excuses, and a couple people asked me, “What if you just go to Regionals and do everything with perfect form and make that your statement?” Basically, they called me on my bullshit. So I went, and found myself qualifying for the Games. There I was again! I’d sworn I wouldn’t go, and that was also out of nervousness.

I was riding home with my coach at the time, Gary Hirthler, and he told me to think about it overnight. He told me, “You might just want to consider taking this opportunity this year,” and he was right.

Really, I want my message to be: Never be afraid to challenge yourself, or to put yourself out there.

What do you do to stay on top of your recovery?

Mainly, food and sleep. I really try to be diligent about eating healthy food and eating enough food and about going to bed early. I put my kids to bed between 8:30-9:00pm and I’m in bed soon after. I often get up at 4:30 or 5:00am, so I really try to make sure I get to bed on time.

What are you currently working towards, professionally and/or personally?

Like I said, this year I’m turning 40, which means I’m entering the Masters category. I’d like to compete as a Master at the Games.

If you could go back in time and give yourself advice way back when you were getting started as an athlete, what would you tell yourself?

I would’ve told myself not to be afraid to put myself out there. It’s so funny, before every competition—even though I’ve done Regionals now for 5 years—every time, I’m wondering why I’m doing this “I cant’ believe I’m putting myself in this situation.” But then, always, when it’s over, my first thought is “Oh my god, I can’t wait to do this again next year.” In those settings, when you truly are challenged and you let yourself be challenged, it’s amazing what you can accomplish.

Where can people go to find you? (websites, social media, athlete pages, etc?)

Just my Instagram, but I’m not really good about posting stuff about me—there’s a lot of my kids on there. I’m not great with social media or self promotion, so you really just gotta come to the gym, CrossFit Santa Cruz Central.