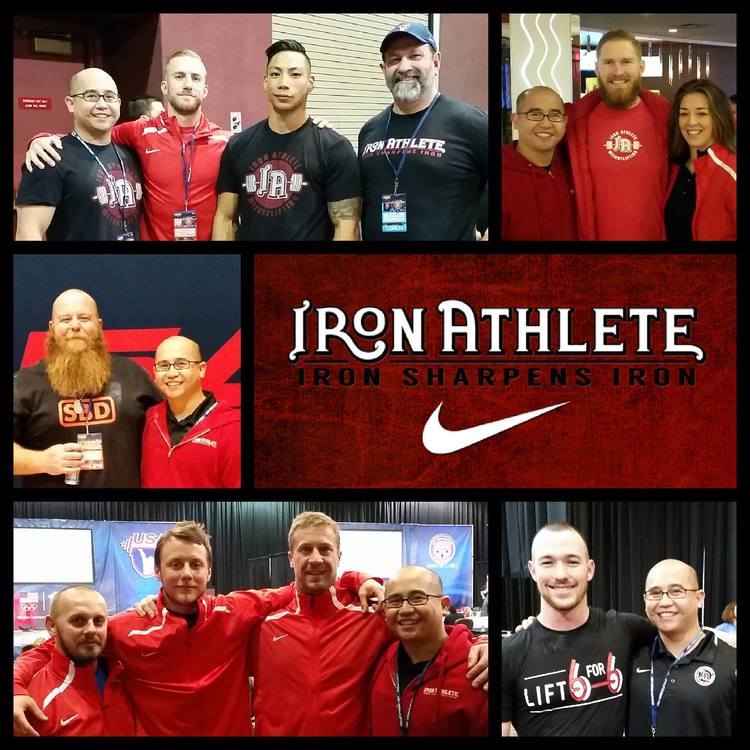 To say I had a “crazy weekend” would not even begin to describe my experience these past few days. I was at the Grand Sierra Resort in Reno, which hosted the 2015 USA Weightlifting American Open and the USA Powerlifting West Coast Regionals.  I came primarily to coach our team of 8 talented lifters at the American Open, but was joined by one other athlete from the Powerlifting side of things as well.  As a relatively newer coach, I have been amazed by the growth in popularity of weightlifting over the last few years.  With over 900+ lifters attending the American Open, I knew I was in for a show.  For many attendees–including a lot of the competitors on the Iron Athlete team –this was their first taste of a National meet.

Shortly before the American Open, East Valley Crossfit (EVCF) Head Coach and Iron Athlete founder, August Schmidt permanently teamed up with Matt Foreman of Core Crossfit and Woodshed Weightlifting, uniting the two weightlifting clubs under one banner.  As such, this was the inaugural event where lifters from both sites competed as one team. Matt’s lifters were the first to lead the pack on Friday.

Nathan Weamer started off the weekend with competition PRs in both lifts, ending with a 94kg Snatch and 130kg C&J in the 69kg class.  Teddy Perez capped off the afternoon with a 118kg Snatch and a 145kg C&J later that day for the 85kg class.  I have seen them hit bigger numbers before, and I know this first taste of National competition has lit a fire in both of them. They will be back for much more. From speaking with Coach Foreman, I know he has big plans for them both.

Saturday felt like home to me as three of our EVCF lifters took the stage in their first senior National level meet.  Andrew Cifelli led the troops early in the morning with a 118kg Snatch (just under his competition PR) and 135kg on the C&J.  New to the weightlifting scene, Andrew is actually a very accomplished full time CrossFitter.  In the 2016 CrossFit Open, he was ranked first for the state of Arizona.  His weightlifting has really come along in the last few months and I fully expect to watch his consistency continue to improve.

Andy Wickizer took the stage later that afternoon in the 85kg class. He snatched 112kg to tie his competition PR.  He struggled a bit with his C&J, but closed out with 145kg.  This was Andy’s third meet, and I was proud of the way he handled the change of scenery from local meets.  Look for him to make continued progress in the next few months.

Capping off the evening was Iron Athlete coach and Operations Manager, Doug Carter in the 105kg class.  He tied his competition PR snatch with 123kg and made his opening C&J at 145kg.  He was able to make both cleans at 150kg but struggled a bit with the jerk.  Overhead work is always his biggest struggle, and we are continually working on corrections for it.  I know he will come back in future meets stronger than ever.  Watch for him at Masters Nationals next year as he looks to improve on his Silver Medal performance from this past year.

Sunday was an exciting day as it was filled with some of our remote site athletes.  Josh Embree, former AZ resident and EVCF weightlifting coach, came out of competition retirement and put up some respectable numbers in the 105kg class with a 123kg Snatch and 145kg C&J.  He currently coaches at CrossFit Pearl District and is actively starting a weightlifting club there as the popularity of weightlifting continues to increase.

Olympic Training Center resident, John McGovern, struggled with his opening lifts in the 85kg A session.  However, he was able to pull out a 138kg Snatch and gold medal-winning 184kg C&J on his third attempts to stay in the competition and guarantee his silver medal overall finish behind Anthony Pomponio who made an impressive 155kg Snatch and 181kg C&J.  With that performance, the Iron Athlete Men’s team finished 8th in the overall Standings (pending a scoring correction).

Meriah McLeish, lifting out of Denver and coach at MBS CrossFit, came out of the gates hot in the 75kg A Session. She made her openers in both lifts with an 83kg Snatch and 93kg C&J.  Unfortunately, she struggled a bit with some of her heavier attempts.  Having seen her make some bigger lifts in training, I know she will be back at the 2016 Nationals with bigger numbers.  Coaching her remotely, I was incredibly proud of the way she handled herself on the platform knowing her body was not at 100% going in.

Between those last two sessions, I found myself migrating towards a different kind of warmup and competition area next door: the USAPL West Coast Regionals.  One of our local AZ Powerlifters, Bob McNeeley was competing and I was lucky enough to sneak out during breaks and attempts to watch him squat a personal record 237.5kg (523lbs) on his final squat attempt.  Although I missed his bench press lifts, I managed to watch him pull 275kg (606lbs) for his deadlift.  He will be back for much more and I know he will continue to get stronger and represent AZ well.  Thank you to Larry Maile and Priscilla Ribic of USA Powerlifting for doing everything that you are doing to continue to grow the sport of Powerlifting, and for helping us back home in Arizona to do our part in that growth.

Looking back on this weekend, I cannot help but feel grateful for the opportunity I was given to coach some amazing athletes and watch them perform among the highest level lifters in the country.  While not all lifts were personal records, the determination and focus that I saw in each athlete was inspiring to watch and reminded me very clearly of why I enjoyed coaching.  As I participated in the largest weightlifting meet in American history, I could not help but feel an incredible appreciation for how smoothly the entire weekend was run. If you have not emailed Phil Andrews yet to congratulate him and thank him for a job incredibly well done, do so.  All our sessions started within 10 minutes of the specified times and very few technical issues occurred throughout the weekend.  To run a meet of both that caliber and sheer magnitude, and to run it as smoothly as he did is beyond impressive.  I hope the folks at Nike Weightlifting and Athlete Performance Solutions also know how much the Iron Athlete Team appreciates all that they do for us.  Outfitting a team is not always easy, but having the highest quality gear makes things infinitely more fun.  Lastly, while I probably did not show it behind the stress I was trying to hide during all my lifters’ sessions, I was incredibly thankful to be around some of the highest level coaches in the game.  Helping and watching Matt Foreman with his lifters is always educational for me.  Sharing platforms with coaches like Sean Waxman, David Miller, and Cara Heads Slaughter is something I did not take for granted.  I am already looking forward to the next big meet.