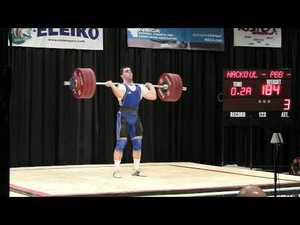 Would you share a little about your athletic background and how you got into Olympic Weightlifting?

I started ‘training’ as soon as I could—from spending hours outside with my brothers and sisters, to long-distance bicycling, to attending the military gym by my house as soon as I could, at thirteen. I became serious about it after doing the competition lifts for football conditioning. I loved the feeling it gave me. I began to see that I had a talent for it, so I trained for high school lifting in the spring. Each year, I grew better and better until I won the Florida high school state championship my senior year. Afterwards, I received an email from Andy Tysz, who invited me up to Northern Michigan University to take a facility-use spot for the Olympic weightlifting team, and the rest is history.

At the Training Center, we train nine times a week along with morning warming sessions at 8:00 in the morning every morning we train. These morning sessions are built to loosen up one’s body with short stretches, some core work, and pushups. Afterwards, we, as a team, have breakfast and break off until the first training session which starts at 10:30 a.m. Depending on the day, this may either include snatches from varying heights (Monday, Wednesday, Friday) or squats and other accessory exercises (Tuesday, Thursday, Saturday). Later in the afternoon, on the days we snatch, we will do lifts associated with the clean and jerk at 4:00 p.m. These sessions will be two to (rarely) four hours depending on the workload and the number of exercises. On one of the squat days, it is not uncommon to see seven to nine exercises that are designed to build technique in certain areas.

Tell me about the Olympic Training Center! How did you get invited to train there? What is the environment like?

The Olympic Training Center is a great place in that it gives me the physical and mental tools to succeed. I am excited to train in a place where I am both in awe at the sheer amount of talent that has lived within its walls while still trying to build my place as someone who makes a name for himself in weightlifting. I have access to sports medicine, the greatest gym in the nation, the best coach in the world, and, very importantly, an environment that pushes me to my best each and every day I step on the platform.

I got invited to “try out” the Training Center the summer after I qualified for Junior Worlds in 2012. I was able to experience working with Zygmunt while I was in Guatemala, and I was very impressed with how he saw every part of each lift, down to the smallest details. This made me want to work with him more, so I was thrilled to take the trip. After I did well with his training, I was given a spot immediately, but I didn’t actually take it for a year because I wasn’t sure what to expect.

I believe you’re currently working on your biochemistry degree and you intend to go on to medical school. What drew you to medicine? Do you see any correlation between your studies and your discipline as a weightlifter?

Initially, I was drawn to medicine by the work of one local physician who visited our anatomy class and worked as our team doctor for football. That man was Dr. Dabezies, and I was enthralled with his work in orthopedic medicine and how compassionately he dealt with his patients. I have always looked for a profession that, at its very core, works to help people and change their lives for the better, while also challenging me to use my mind.

I have parents that pushed me to excel by their example of exemplary hard work and sacrifice. That led me to put a big emphasis on school, which directly translated into weightlifting. I strove to be the first in the gym and to think outside of the box, and also to do everything I could to train as effectively as possible.

Who are some of your biggest influences in weightlifting?

Some big influences in weightlifting for me are Ilya Ilin for his stage presence and winner’s mentality, Apti Aukhadov for his technique and athleticism, Zach Krych as a testament to what one can overcome with enough heart, and the athletes I train with every day.

Outside of weightlifting, what other activities do you enjoy?

I love travelling around the country and talking to people and seeing what makes them tick. I hope to travel the world one day, so I do spend time each day studying some language. I also enjoy pretty much anything outdoors, video games, and reading.