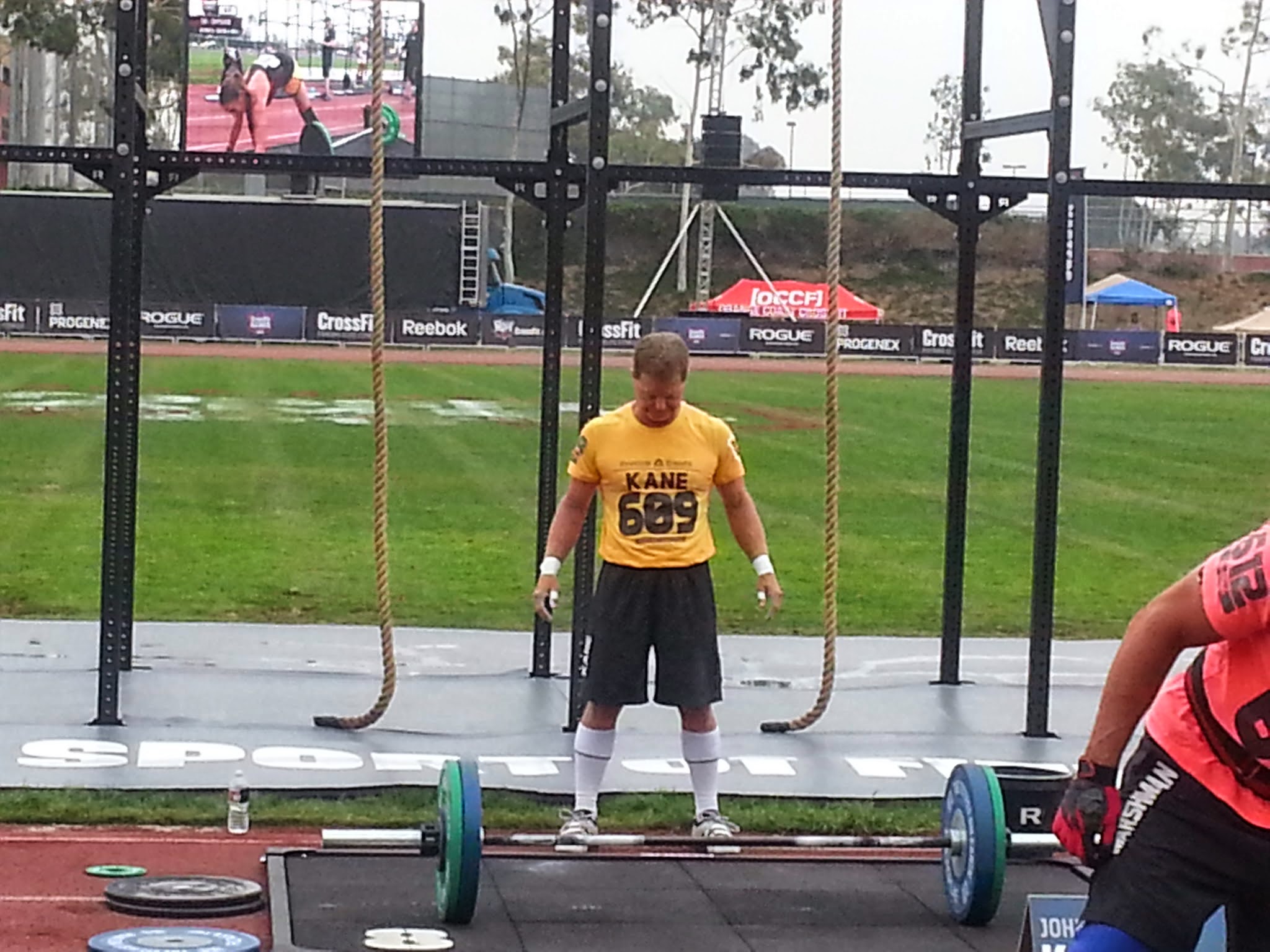 John trains and coaches at CrossFit Santa Cruz Central. He participated in the first two CrossFit Games and has been an active competitor ever since, reappearing in the Masters division in the 2013, 2014, and 2015 Games. Currently, he is preparing for the 2016 CrossFit season.

First of all, how were you introduced to CrossFit and how did you come to compete in the first two CrossFit Games?

I was introduced to CrossFit at the end of 2004. My son was playing high school basketball and he came home from practice telling me about this coach that was making them do crazy stuff like thrusters and sprints. I wound up talking to the trainer during basketball games. At the time, I was a big runner—still am—and I asked him what I could do to help with that. He told me, “overhead squats.” I looked up overhead squats, looked up CrossFit, started down that road, and I’ve been hooked ever since.

By 2007, I’d been doing CrossFit for about two and a half years. At that time, I was 53 or 54 years old. The Games were held in Aromas, which is very close to where I live—ten minutes away. There was just a very small community at that point. I thought it wouldn’t hurt to sign up, so I did. I just went out there—there were probably 40 guys and 20 women and I just did it! Of course, I was terrified… The first workout came out of the hopper—25 pull-ups and 7 push-presses at 135lbs for 5 rounds. I didn’t really have pull-ups then, and I certainly didn’t have 125 in me, but the workout was scaled to jumping pull-ups. I thought the 135lb push-presses would be easy, but when I went to clean the bar, it about knocked me over.

The second workout was a run and I thought, no problem—I can run. I don’t know if you’ve heard about the hills in Aromas, but they’re really something. This was like a 3-4 mile run, and it was no joke. But, I went out and did it. There were probably 5-6 people from our gym who were there, and it was really good time.

Having competed at a high level in CrossFit for all this time, have you had to adapt your training as CrossFit became more popular and the sport became more competitive?

I have had to change. It’s become almost full-time all-year. It’s more than just going to the gym and doing the workout of the day and coming back. It’s gotten more and more difficult.

So, the story of me with the Games: I competed at the Games in 2007, 2008, 2013, 2014, and 2015. In 2007 and 2008, you just kind of showed up. That was great. In 2009, they started Regionals Qualifiers and, of course, when they set the weights for guys who are 25 years old, I wasn’t going to qualify, but of course I gave it a shot. In 2010, they introduced the Masters division. I was really pumped for that. I’d worked super hard. I was probably in the best shape I’d been in up until that point. I was set to go for the Regional Qualifiers for the Masters and I tore my bicep tendon 10 days before. In 2011, I wasn’t quite ready to come back because of my injury. I declined to compete even though I did all the Open stuff. In 2012, I just missed qualifying by four slots, so in July of 2012, I started almost immediately training for the 2013 Games.

It’s been the same ever since—although I do take a little time to decompress after the Games. I found myself icing my shoulders every night, my knees. I’ve come home from work at 5:00pm and fallen asleep—things like that were commonplace. Being 62 with the mind of an 18 year old, I think I can do all this stuff. I can’t. It catches up and I have to be careful with what I do and how much I do, taking care of myself and resting.

What do you do for rest and recovery?

Sleep is the best. I try to get to bed earlier. If I can get to bed at 9:00pm, that’s golden. Most of the time I’m up at 5:15am. Stretching, also. I do yoga—a lot of that really helps. I do see a masseuse and that helps a lot too. Pretty much eating right, living right.

I go to the gym around a quarter to 7:00. I run a mile and do whatever the WOD is—typically we have a strength component and a metcon component and then I do some training on my own. Depending on what the strength/metcon is, I’ll either do my own stuff before or after. For example, I just came off a 9-week strength cycle and I would do that first. Usually, I’m at the gym for about two hours.

On Saturdays, I work out at my home gym in my garage. I’ll typically snatch and sometimes clean and jerk. Sundays, I run—about 3-5 miles. If I’m not running on Sunday, I’m racing on Sunday—5ks. I try to look at those as a training component, with a more relaxed attitude. I’m not going to bust my butt and knock myself out for 4-5 days. I’ll push it on the last mile, but still have something left and be okay the following day.

As a Masters athlete, do you think there are particular considerations unique to Masters competitors?

Like I was saying earlier, I think you need to be careful and intelligent about your training. Recognize your age. You get to a point where your body just will not accept all the things that you try to do it. But as with all athletes, I think you have to get strong, you have to get fast, you have to develop your heart and lung capacity, and just be willing to put yourself out there and get it done.

I know you were a yoga instructor for many years—can you tell me how you fit that practice into your training regimen?

If I’m really going to do a yoga workout, I’ll separate it. I won’t try to do a yoga workout and then run or something. By really workout, I mean maybe an hour’s practice. Typically, though, before a workout, I’ll loosen up a little bit and I’ll do a little after the workout as well. 5-10 minutes on either side. CrossFit, especially, is so tough on the shoulders. I really have to work on that area and keep it open, keep it stretched, keep it alive. It can get so tight with all the pull-ups and overhead stuff.

I’m not much of a social media guy, but they can find me at CrossFit Santa Cruz Central.