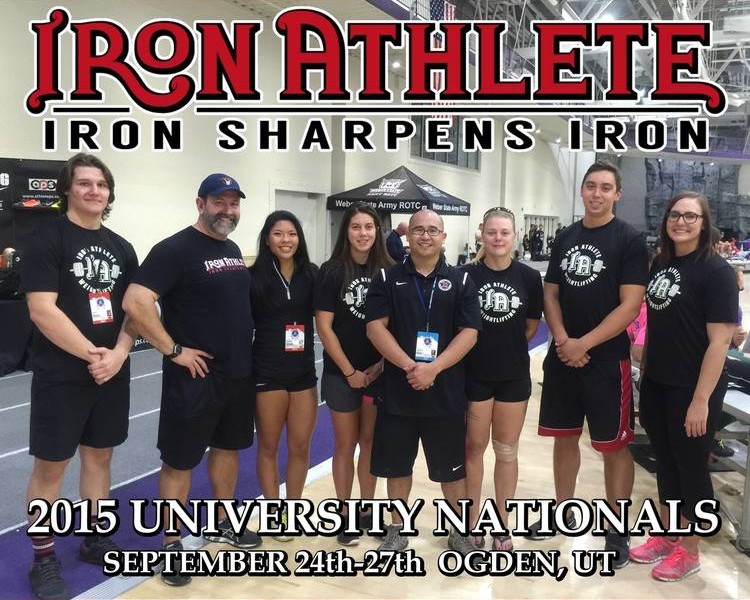 It was a beautiful weekend in Ogden, Utah as the young Iron Athlete team competed at the National University Championships. Coach Jeremy Galo brought a dedicated group of collegiate-aged lifters from our Arizona gym to the competition. Deirdre Lenzsch, who’s been training at the Olympic Training Center, also met up with the team. She was looking to potentially secure one of the two remaining spots for the World Team.

Mark Fasciana, in his last year as a Junior lifter, started the team off in the 105kg Men’s C session. Even though he was only able to make his opener with a 102kg snatch, this was still a 2kg meet PR for him. He closed out the C&J portion with a 135kg lift, which was both a 5kg meet and lifetime PR for him.

Jacob Reine, a former lifter for Redline Athletics and Jonathan Teague, joined our team earlier this year. Despite only having a short period to train for this meet, Jacob made a lifetime snatch meet PR with 110kg. He also tied his meet total PR later in the 94kg Men’s B session.

Three of our local ladies competed in the 69kg Women’s B session. Even though this was the first national meet for Elizabeth Zapata and Cassie Kusa, they looked like veterans out on the platform. Elizabeth was able to tie her snatch meet PR at 63kg and came close to a meet PR total. Cassie was able to finish out her lifting with meet PRs on her snatch (64kg), C&J (83kg), and total (147kg).

Bri Petit closed out the 69kg session with meet PRs on all three categories as well. She hit a 68kg snatch, 85kg C&J, and a 153kg Total. Bri was able to get 90kg overhead, but was called for a light pressout. Had she made the lift, she would have won her session.

Deirdre Lenzsch competed to take a shot at the World Qualifier. While she was able to snatch an impressive 97kg in the Women’s 75kg A Session, she was unable to posta C&J to get a total. She will be competing in Russia for the IWF Grand Prix President’s Cup in December to give herself a shot for an Olympic qualifier.

Samantha Maxwell closed out the weekend for Iron Athlete, competing in the Women’s +75kg A session. She hit a lifetime PR snatch at 77kg and would have also made a lifetime PR C&J at 96kg but was called for a light pressout. She closed out the meet with her opener at 91kg C&J and a 168kg total.

As Iron Athlete continues to grow and to develop young athletes, we are happy to see all our local lifters post both meet and lifetime PRs on the competition platform. As they mature into more seasoned lifters, they will see even more improvements in their totals and overall technique. We look forward to watching their development.

Thank you to Weber State University for putting on a first-class meet with organized transportation to and from the venue and hotels. The meet ran smoothly and it was a great experience all around. We all look forward to competing again next year! Now, on to the American Open!