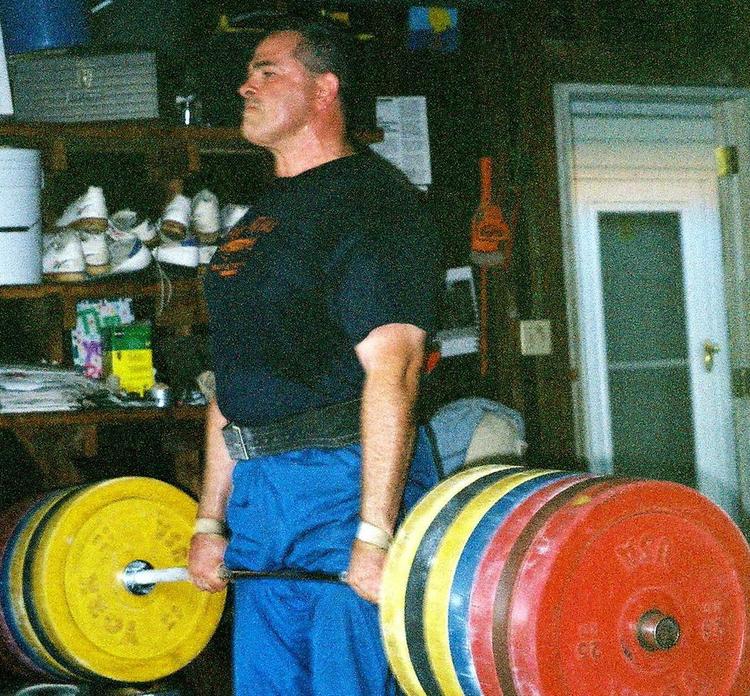 As an introduction for our readers, could you speak a little about your athletic background and what brought you to weightlifting?

I had an older brother who was a college football player, and he was extremely strong. He introduced me to weights when I was thirteen years old. I admit that I didn’t like training at first, but after I started to develop as an athlete and doors began to open for me, I decided that this was the right way to go.

I played all the sports until 9th grade, when I talked to my father about not playing basketball. I wasn’t very good at it, but he thought it was as good in that it kept me from just sitting on my butt and not doing anything. He asked me what I would do if I decided not to play, and I told him I wanted to train with weights four days a week. My father asked me if I thought this was something that I would stick with (I look back at this and wonder what he would say now).

My sports were then football and track, and I loved to play softball with my brothers at slow pitch tournaments. I enjoyed having these family sporting events together, and we were very good as a team. We won all the time; we were all homerun-type hitters, and we had fun with it as well.

Even though I received multiple division one football scholarships, I never thought I was that good. I think this attitude made me work harder all the time in the weight room. After lettering all four years at East Carolina University, I had some NFL and USFL interest in me, and I signed some professional football contracts.

As a young athlete, I lifted with some of the best powerlifters in the world. It made me strong, but I admit I lost some mobility and couldn’t let this go on if I wanted to play football. So, I started training with the ECU Strength Coach, Jeff Johnson. Jeff was a nationally ranked Olympic lifter, and this is really where my journey started in our sport.

Tell me about Team Houston, and how you wound up there! What are the demographics of your lifters like? What are your aspirations for the team?

I moved to Houston, TX for a job opportunity with the same company that I still work for today. When I arrived, I also worked with some of the Houston Oilers, teaching Olympic lifting—mostly pulls and partial lifts. I then decided to start working with younger lifters—beginning with my friends’ kids, preparing them for Texas high school football.

After that, I was introduced to an older man named Otto Zeigler from Baytown, TX. He was a tough guy with a kind heart. Otto loved kids, and I saw that he was making a huge difference by training youth lifters in our area. That was really when I started shifting my energy in this direction. Otto’s club was called “The Weighting Place,” aka Team Houston, which is where our name came from. We keep the name in honor of Otto.

As a coach, I still trained older athletes, including the Houston Rockets Strength Coaches and NASA astronauts, but I felt that “grassroots” weightlifting was the right thing to do.

My aspirations for this team are: to continue to go to competitions at all levels; to develop athletes to the international level; and to watch young kids evolve into strong men and women with the self-esteem and discipline to be productive members of society.

I’ve heard that you spent time learning in Russia, could you tell me a bit about that?

Yes, I went to several Slavic countries, including Ukraine and Russia. I also visited Latvia and the Czech Republic and trained some there. I went to the Junior Squad training sites for these countries and observed what they were doing with their youth programs. I also had the opportunity to visit many beautiful cities and meet lots of interesting people. The coaches in these countries welcomed me with open arms. I recommend this experience to anyone who would like to learn about older USSR methods from passionate coaches.

It seems to me that there’s been more international interaction in the weightlifting community—with people like Klokov and Berestov, and Ilyin coming to America to teach clinics. Do you think American weightlifters and coaches have a lot gain from studying the methods of other countries?

I see a lot of what these athletes and coaches have published on the internet, and what they’ve done with CrossFit gyms. I think these guys see an opportunity to make a lot of money in the USA. The US has plenty of good coaches, but I think people are drawn to new and different things. I’d just be careful about two things in these instances: first, they need a good interpreter to prevent miscommunication; second, good lifters don’t necessarily make good coaches. The top coaches in the Ukraine didn’t even look athletic to me, but they were fantastic coaches.

Well, I will be brief because I don’t want to open a can of worms here. I would like to see USAW be more transparent in their decisions—do a better job of communicating about qualifiers and totals far ahead of time so we can plan for our athletes appropriately.

I would also like to see higher qualifying totals from the junior level up—to keep the meets under control. I think it’s a bit ridiculous to have 75 lifters in one class. Raise the totals. Though, one caveat: I think the Youth National Totals should remain the same tot keep kids interested.

What are your aspirations for your own future, personal and/or professional?

My aspirations are simply to work with kids and to help them with their self-esteem. If one of them develops to compete at a high level, then that’s great. However, I’m not out recruiting lifters from all over the country to stroke my ego. I’m a grassroots weightlifting guy.

I do have a website that we haven’t done anything with for 5 years. I keep up because it gives people in the area an initial contact if they have questions about training:www.teamhoustonweightlifting.com. I also have a Facebook page.

If you’re interested in helping at the World Championships, get ahold of the Harris County Houston Sports Authority and put your name on the list of volunteers!