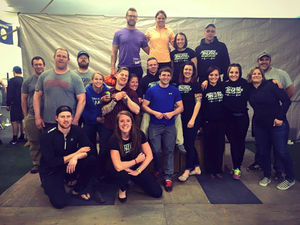 On the weekend of May 11th & 12th, I traveled to Montana in order to attend The 2015 Altitude Athletics Spring Open Weightlifting Meet and to coach the Iron Athlete Weightlifting Clinic Featuring Alex Lee and Norik Vardanian.

The Meet was hosted by Altitude Athletics/Coldsmoke CrossFit.  The meet directors were John Murie and Tyson Bradley, owners of the host gym.  I had the pleasure of running the table alongside Leslie Allen.  The platform was a beautiful design, put together by 8 x National Champion and 2 x Olympian, Mike Karchut.

The Women’s Session consisted of 22 lifters, 10 of whom qualified for their respective national meets.  The Top Female Lifter based on formula was Kathleen Winters with lifts of 72/92/164 in the 53kg Class.

The Men’s Session consisted of 30 lifters, 7 of whom qualified for their respective national meets.  The Top Male Lifter based on formula was Ben Wetzel with lifts of 124/148/272 in the 85kg Class.