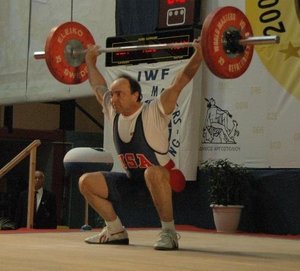 Les Simonton began competing as a weightlifter in 1984. During his career, he participated in the 1996, 1997, and 1999 American Open, fifteen National Masters Championship Competitions, and nine World Masters Championship Competitions. He became a USAW National Coach in 2014, and has been an IWF Category I Referee since 2005. Coach Simonton served on the USAW Technical Committee from 2006-2014, and as the Competition Secretary for seven World Masters championships. In 2006 and 2007, Coach Simonton hosted the American Open, and he was on the USAW Board of Directors from 2010-2014. He has also been the USA Masters Webmaster since 1999, and the IWF Masters Webmaster since 2005.

Let’s start off with a little background of how you first got into weightlifting.

In the previous century, when I was young, I played sports. I was not particularly talented, but was always interested in learning how to get stronger, faster, and more explosive. From reading and observation, I gathered that Olympic style weightlifting was superior to general weight training for these objectives. I was fortunate to eventually discover a club in my area and I began my lifting career in 1984. I continued to participate in some sports, but soon came to realize that I liked weightlifting better than any other.

What roles have you played in the sport over the years, and which of those do you prefer?

I began as an athlete only. After a couple of years I started helping younger lifters, so I was in effect coaching despite a lack of formal training. In 1996, things changed. I volunteered to work at the Olympic Games in Atlanta. Upon receiving my work schedule I disappointed to discover that I was assigned to the venue only ¼ of the time. The rest was spent at the training hall. But, I soon realized that the training hall was THE place to be. It was the first time that I worked “behind the scenes” and it was infectious.

In 1998, I officially became a club coach and also sat for my national referee’s card. Having a strong technology background, I found it quite easy to manage competition results on my computer. This got me noticed, and before long, I was recruited to help behind the scenes at international masters and national weightlifting competitions. I continued along the “referee trail” and obtained my Cat II and Cat I rankings in 2003 and 2005 respectively.  In 2006 and 2007, I served as organizer and director for the American Open.

Over the past 10 years, my role as an athlete has diminished greatly, but I have continued coaching, refereeing, and performing various administrative duties. I continue to serve as the Competition Secretary at several of our national competitions and at national and international masters’ competitions. I still coach some, but am pleased that athletes I once trained are now handling most of the coaching in our club. I served on the technical committee for several years and I served one term on the USAW Board of Directors. I manage a couple of masters’ websites. No doubt this gets back to my EE roots, but I prefer the tasks relating to the technology side of the sport.

You’ve spent a lot of time behind the scenes at competitions. Can you describe what a typical weekend may entail at a meet like Senior Nationals?

From the standpoint of a competition secretary, the behind-the-scenes work at our Senior Nationals (and other) competitions really begins long before the competition. My work starts with reviewing the entry form, devising (or at least contributing to) the schedule, and managing the start list. I arrive at the competition site the day before or day of the Verification meeting. When we used the old Eleiko scoreboard, I was its de facto installer and manager. However, conducting the verification of final entries and technical meetings is easy and straightforward. The really difficult task is assigning referees. I am always thankful that Corinne is usually around to handle this.

For me, the most time consuming duty is conducting the weigh-ins. Following each weigh-in, I prepare the paperwork for the upcoming session. Duties have changed somewhat at our USAW national competitions in the last couple of years. Now, someone else usually sets up and manages the new Eleiko scorekeeping system and someone else is responsible for compiling the individual and team results. Being there from the beginning of the first weigh-in until end of the last session is the most taxing aspect of being a CS. When someone else handles a weigh-in for me, I can spend the session in the referee’s chair or on the jury. As CS I do not see as much of the action on the platform as I would prefer.

Have there been any significant changes that you’ve noticed in the sport while you’ve been around, either positive or negative?

There have been four significant positive changes since I have been around. During my first 24 years in the sport, not much changed. The sport was stagnant and membership either remained static or fell slightly. Local meets were few and far between. The leadership, though well intentioned, lacked resources and vision. A big problem was that the governance structure at the time facilitated the status quo.

The first significant change occurred in 2008, thanks to the USOC. Their representatives attended our Board of Governors meeting and gave us two choices: change our governance structure to a model of their approval, or be decertified as the governing body of weightlifting in the USA. We appointed a committee to produce a new set of by-laws (approved by the USOC) which diversified the governance and opened the door for new ideas and growth.

The second significant change was CrossFit. Regardless of what individuals may think of CrossFit in general, they are undeniably responsible for a tremendous surge of interest and participation in weightlifting at the local and national levels. Prior to 2013, it was unusual for the American Open to have as many as 250 competitors. It was always a single platform competition. The Youth (school age) championships would sometimes draw more than 300 and have to use two platforms. The 2013 American Open in Dallas saw an explosion of entries. We knew we would have an increased number of entrants and had planned to have two competition platforms. We were not prepared for the 430 entries we received. There was a great deal of scrambling and a third platform was added. The 2015 Youth championship has over 600 entrants!

The third significant change was the USAW taking over the organization and control of our national events. Some people greatly resented this change, but it was a major step in the right direction. This additional responsibility necessitated that USAW create the full time position of event director for which we hired Phil Andrews. The timing was fortuitous. He came on board shortly before the explosion of participants. Dallas (and some subsequent meets) would have been a disaster without him. To a certain degree we are still feeling our way forward, but our national events are now truly National Championships rather than glorified local meets.

The fourth significant change is the advent of social media. This has at the very least broadened public awareness of our sport (and CrossFit) to an extent unimaginable just a few years ago.

With the good, there is also bad. Thankfully, the good far outweighs the bad. First among our problems: the tremendous increase in athletes has far outstripped the number of technical officials. This imbalance has resulted in national competitions without juries (or juries in only a limited number of sessions), overworked officials, and inconsistent decisions. However, capable minds are working to solve this problem and I am confident we will remedy it with time. The increased popularity of and participation in our sport has also created a number of self-proclaimed ”experts” who peddle their “expertise” online and at expensive clinics. Those of us who know the sport can spot these individuals immediately. Unfortunately, others cannot, and many enthusiastic people end up paying the price by learning incorrect (and sometimes dangerous) movements.

If you could change any one thing about the sport of weightlifting in the United States, what would it be?

I would dearly love for weightlifting to be an NCAA sport and high school sport in all states. This alone would put us back on the podium at the Olympics.

Finally, what do you enjoy most about weightlifting that has kept you so involved for the past few decades?

Some would say that masochism is responsible for keeping me in the sport ;). Personally, I think it is the people. We have some good, hard-working people who are fun to be around in our sport. Additionally, a sense of being able to make a difference has helped me stay involved. When I was training regularly, I also received a great deal of satisfaction from the physical results I found in training. (When moving the piano, I would carry one end and my three non-weightlifter buddies would carry the other end). These days, I sometimes look back at the difference weightlifting has made in my life. The friends I have made (and continue to make) because of weightlifting and the countries I have visited (22 so far) because of weightlifting have greatly enriched my life.

Is there a need for greater logistical support in weightlifting? If so, how would someone go about growing into that role?

There are so many elements of weightlifting. Organizing and conducting of a competition entails an expansive list of requirements all by itself. One of our biggest needs now is more quality technical officials. It begins at the local level. I would encourage all clubs to train local referees. Many will eventually work their way up the ladder to the national and international level. The chairman of the technical committee, Terry Grow, is the primary contact point.  In the competition itself, reliable volunteers are essential. Some competitions lack sufficient numbers.

Providing assistance and support for new athletes and clubs will only help the sport. For example, in the past year or so some CrossFit locales have asked our weightlifting club to put on competitions at their facilities. We pack up equipment (sometimes a completion platform), supplies, and electronics and travel to their sites to conduct competitions.

Teaching is of utmost importance—providing the facilities, expertise, support, and all else required for training new and veteran athletes. Creating a quality online presence (skill, training regimen, rules, etc) is also important for the growth of the sport. The coaching education director, Mike Conroy, no doubt has lots of ideas, suggestions, and valuable information along those lines.