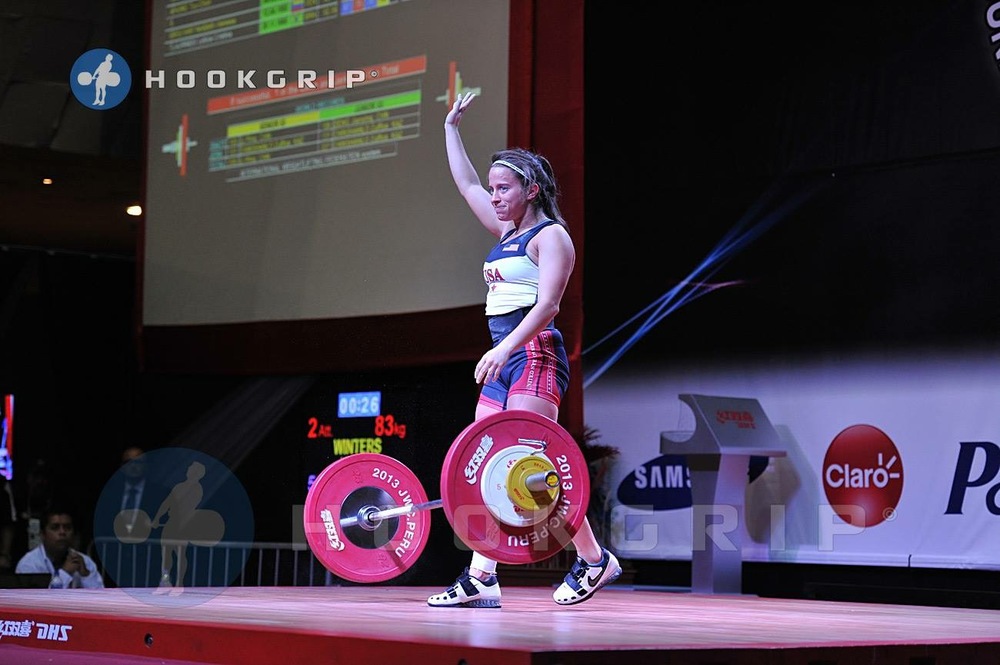 Please share a little about your athletic background and what drew you to weightlifting:

I was born and raised in Bozeman, MT, where I grew up as a competitive gymnast. At 15 years old, I decided I was no longer fit for the life of a gymnast, but I soon discovered life was really boring without any sports. So, my mom and I joined a local CrossFit gym and went together on weekends!

With such a strong gymnastics background, I took to most of the movements pretty easily. After about a year into CrossFitting I was asked to coach I took and passed the CF Level 1 at age 17. Being the power gymnast I was, I realized I loved the Olympic Lifts more than anything in CF—everything about them, the technicality, the speed, and of course the strength it takes to perform them.

After learning the lifts from my CrossFit coaches, I was introduced to the great Mike Karchut and Steve Gough at a neighboring gym. Mike and Steve live several hours away and take the time to drive into town twice a week to coach athletes of all different ages and capabilities. If it wasn’t for them I would not be where I am today.

I know that you still make time for CrossFit in your training—how do you balance that with your priorities as a weightlifter?

Yes I do! As an owner of not only a weightlifting club but of a CrossFit gym I think it is very important I continue to practice and train the movements (Muscle ups, pull ups, wallball, burpees, etc…) not only so I know what I am putting my members through, but also so I can safely and effectively coach them. There are far too many gyms out there with mediocre coaching and education.

I try to “WOD” 2-3 times per week—nothing crazy, you probably won’t find me doing “Memorial Day Murph” or “Fran.” I stick with a lower intensity regimen as I am not training to compete in CrossFit. I do not perform many, if any, barbell movements in my “WODS” as I find it can easily mess with my motor paths. I look at my CF workouts as something fresh and simple. They are mindless and take no more than 20 minutes.

As a weightlifter, coach, gym owner, girlfriend, daughter, and friend I find most of my time is spent meal prepping and cooking, cleaning, doing laundry, paying bills, coaching and learning, and of course training. So CrossFitting is a short time where I can escape from it all. Some might say weightlifting itself is where they escape but for me weightlifting is another job.

Outside of the training itself, I have to keep myself motivated, I have to eat to fuel my body, I have to stay as injury-free as possible, which sometimes means skipping out on Friday night lake time, boating, hunting, hiking, camping, etc… Thus far I have had no problems squeezing in a few “WODs” a week, my priority is obviously Weightlifting so I don’t allow myself to do any type of CrossFit until I have put in an adequate amount of time and energy in the lifts each day.

Tell me about Team Montana! What are your aspirations for it?

My mother and I revamped the original weightlifting club in Montana known as Team Montana, which was founded by Steve Gough back in the early 2000’s. We reopened the club at the CrossFit gym we were at in 2013. It honestly did not take much beyond adding a few platforms and ordering some weightlifting equipment. We were fortunate enough to already have Mike and Steve, so we just wanted a place to train consistently. At this point we were still hopping around the local gyms where they coached, and training was not exactly stable.

That year, 2013, was the biggest year in my weightlifting career thus far, I took silver at the Jr. National Championships, which earned me a spot on the Jr. World Team in Lima, Peru. I then went on to compete in the Jr. Pan-American championships where I took silver in the snatch, and bronze in the clean and jerk and total. I had a devastating ending to the year when I went literally 0/6 at the 2013 American Open. I was hoping to break the Jr. American record snatch and total, which I had done unofficially at a meet the month prior. Although I was very disappointed, I didn’t let it stop me from coming back strong the following summer at the 2014 National Championships where I took silver behind Morghan King! My aspirations for Team Montana include getting more junior and youth lifters involved and putting Montana on the map as a weightlifting state!

Your mom is also a weightlifter. What role has she played in your development as an athlete?

Funny you should ask that, my mom is the entire reason why I am the athlete I am today. In 2012 my mom decided she was going to become a competitive weightlifter and crush some Masters American and World Records! One week before the meet to qualify for the master’s nationals (where she ould have qualified for worlds), she missed a snatch in practice and wound up with two insane fractures in her ankle. Lucky for me, she had already purchased plane tickets for both of us and paid her entry fee, so by golly we were going!

I took her spot in the meet and killed it. I not only qualified for the 2012 American Open, but also the 2013 Junior and Senior National Championships. I guess you could say it was it was a blessing in disguise! As far as my more recent development as an athlete, I give many thanks to not only my mom for her continuous support but also to my boyfriend who is my financial backbone. As you know, most weightlifters aren’t millionaires and do not make a lot if any money training and competing. Day in and day out Dame sacrifices his training time to work so he can pay our bills. Obviously my teammates (including my mom) and coaches continue to support me and everyone on the team, I would say not only are my teammates my training partners they are my best friends and for that alone I am eternally grateful.

In your experience, what are the most important factors to becoming a successful weightlifter?

To become a successful weightlifter, number one, you must have a passion for working out and be prepared to spend a lot of time doing it! In my opinion, weightlifting is quite possibly the hardest sport –psychologically speaking. Weightlifting tedious, and not tedious like running or hiking. You cannot mindlessly weightlift; every lift in practice and on the platform requires a colossal amount of focus. It’s not just about putting one foot in front of the other until you cross the finish line. THERE IS NO FINISH LINE!

Weightlifters are a different breed, I mean who wants to do the same three lifts (yes I included squats) over and over and over and over again? It sounds terrible on paper… But there is nothing like getting a PR after 6 months of dragging ass into the gym. Some days you are tired, actually every day you are tired, you are sore, your back hurts, your wrists hurt, your doctor tells you it’s bad to squat below parallel. But even after all of that you have to be willing to show up every day and do something, whether it be a light power movement or even stretching. You must be ready to fight a losing battle with yourself, because in the end when you step out on that platform it’s up to you. Which you is going to show up?

Outside of CrossFit and lifting, what do you like to do for fun?

Well, I have no life outside the gym. But, seriously. If I am not at the gym, I am with my friends from the gym, outside the gym. My mom lifts, my sister is an amazing lifter and quite possibly the only reason I train sometimes. My brother and other sister both do CrossFit, my boyfriend does both, and like I said my best friends are my teammates. When I am not at the gym I am usually at home cooking, baking, cleaning, doing laundry, grocery shopping, just keeping the house sound.

I am very particular about organization in all aspects of life, it keeps me busy and helps keep everything running smoothly. On the weekends after Saturday’s training, we all try to get outside, fishing, and shooting, hiking, camping, lake time. We spend a ton of time together with family and friends, we have BBQ’s, we road trip, we go to movies, dinner dates, you name it! As you can see, I am super busy, but I wouldn’t have it any other way. Life is too short to rest!

What are your current goals—competitively, professionally, or personally?

My biggest goal this year is to qualify to compete in the Olympic Trials next year. Since the rules have changed, I need to compete at two international meets in order to do so. My priority now is to total high enough to compete internationally. Professionally, I am going to continue to grow my businesses: both Team Montana Weightlifting Club and CrossFit Belgrade. I would like to generate enough income not only to pay bills, but to support first and foremost my mom and my weightlifting expenses and also to help out with the expenses of our athletes! Personally I can’t wait to see what life has in store for me. I have been through so much at such a young age and I am looking forward to my future as an athlete, coach, and somebody!

Where can people find you?