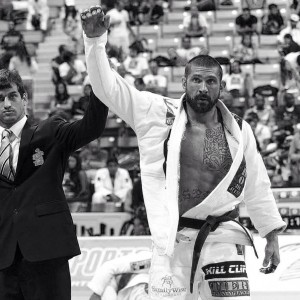 Professor Shebaro earned his Black Belt from Carlos Machado in 2004, and is currently ranked as a 3rd degree Black Belt under Professor Octavio “Ratinho” Couto. He was 1 of only 4 Black Belts in Brazilian Jiu-Jitsu in the U.S. Army and is the first Brazilian Jiu-Jitsu Black Belt in a Special Forces Regiment. Most importantly, Professor Shebaro has trained a broad spectrum of operators during his deployments to Iraq in support of Operation Iraqi Freedom. These operators included U.S. Army Special Forces from all Groups (Active Duty and National Guard), U.S. Army Rangers, U.S. Navy SEALs, U.S. Air Force Special Operations, Tactical Air Control Party (TACPs), Combat Controllers (CCTs), and U.S. Marine Force Recon.

Alan Shebaro has spent a great deal of time training members of the greater Dallas, Ft. Worth area’s Law Enforcement professionals as well as the FBI Hostage Rescue Team (HRT) and Federal Law Enforcement in Law Enforcement Defensive Tactics (LEDT). Highlights of Coach Shebaro’s competitive martial arts record include placing in the top of his division in over 50 International Brazilian Jiu-Jitsu, and Submission Wrestling tournaments.

You’ve been involved in (and excelled at) such a variety of athletic pursuits. Could you give a little bit of your athletic history? How did you get involved in BJJ, MMA, and eventually weightlifting?

I started training in various martial arts around 1996, when I was 20 years old. The only problem was that I was 147lbs at 6′ 1″, and in every discipline I tried, I was easily overpowered by someone bigger even though they had less experience. Then I tried out Brazilian Jiu-Jitsu for the first time and thought I was in luck when I found another white belt who was smaller than I was… I got submitted repeatedly by him with the same move over and over. I was frustrated to say the least. I asked him how he kept doing it, and he replied, “I have only been here a week. It’s the only submission I know.” I was hooked after that. I sought out and trained in anything and everything having to do with grappling to better my Jiu-Jitsu, including judo, sambo, and Greco Roman, Freestyle and Collegiate wrestling.

When I got into the upper levels of competition where technique and skill matched up, the person that was stronger, faster, and had the most endurance would win. I was looking for something to cross train in and got into Crossfit…but it was the Olympic style weightlifting that screamed at me. I was so impressed by the amount of power it generated—the precision, explosiveness of the athlete. It became the only thing I wanted to really do.

How did you first introduce Olympic Weightlifting to your training, and how did that training shift as you became more competitive? What does your training look like now?

I wasn’t sure how to incorporate weightlifting and Jiu-Jitsu at first. They seem so different in that weightlifting focuses on the mastery of two precise lifts, and Jiu-Jitsu has hundreds of different submissions and variations. The one thing that seems almost identical, though, is their use of core and hip strength. So, I focused on the accessory movements and incorporated those into 9-week competition prep programming with 3 weeks Max Effort and 3 weeks Dynamic effort. The power generated from weightlifting made a remarkable difference.

For me, a typical strength training routine for Jiu-Jitsu involves A LOT of sled pulls—just about every day even if I don’t lift, and a plethora of squats: box squats, sumo squats, banded squats, front squats, back squats, narrow stance squats…I can’t even list them all. For the weightlifting movements, I like to work off the blocks and use paused low and high hangs (mainly cleans for the pulling power). These help me develop a fast explosive hip drive. I also use deadlifts, pull up variations galore, kettlebells, and a lot of atlas stones. I normally train 3-4 times a week depending on how many times I train Jiu-Jitsu. I limit myself to three workouts a day, and if that happens, the next day will be a single. On the average, though I do two a day, with one being strength/weightlifting and one being Jiu-Jitsu.

When did you start conducting clinics for Olympic Weightlifting? Was there anything about the experience that differed unexpectedly from your experience and skill set as a Jiu-Jitsu instructor?

In my perspective, coaching is coaching, regardless of your area of expertise. I have been coaching Jiu-Jitsu for 17 years—10 of those years training military and Law Enforcement personnel in various fields: Close Quarters Combat; Small Unit Tactics firearms training (pistol, carbine and long range shooting); Combatives both armed and unarmed. Even more challenging for me was training foreign allied Special Operations personnel. However, all of these (and weightlifting) are based on the same principle: getting someone else to understand, retain and execute movements properly, precisely, and with confidence.

Tell us about Tier 1! How many students do you have, what are the demographics like in terms of age and gender and experience level?

I have about 100 athletes that train at my facility. Ages range from 5 years old to 50+. I have a good mix of experience throughout the ranks. I also developed a mentor program a couple years ago that really has been working out well. The more senior members assist the less experienced through techniques and training. New athletes might be overwhelmed or intimidated at first so having seasoned athletes to guide them takes a lot of pressure off.

Though they both demand explosive strength, weightlifting and Jiu-Jitsu seem so different to me. Do you think there’s a way for an individual to train both simultaneously, or do you have to focus on one at a time?

I actually tried to compete simultaneously in both disciplines, and it didn’t work out so well. I had a lot of injuries and in my performance, I never felt above 80% for both. Recovery was almost non-existent. Timing in both disciplines is absolutely paramount and just seemed I wasn’t firing on all cylinders.

Currently, I focus 3-4 months on Jiu-Jitsu and then make the transfer over to weightlifting. I have had a much better success rate this way and injuries have gone down drastically. If a Jiu-Jitsu athlete just supplements with weightlifting training for strength, she or he would reap a lot of benefits. In order to maximize results, however, the athlete would have to have a decent knowledge of weightlifting or the injury rate would skyrocket. If the athlete doesn’t have a background in weightlifting, it is much easier, less time consuming, and much more beneficial to focus on weightlifting accessory power movements rather than mastering the full lifts.

I heard you traveled to EVCF for Kong Fest. What led you to that? Do you do CrossFit-type “WODs” often?

I met August Schmidt at the Masters American Nationals in 2013. He actually destroyed my numbers at the event…which led me on a journey to chase after him and his numbers. He has been a huge influence in keeping my motivation going. Whenever I don’t feel like lifting, I jump on Facebook and see him pull a massive PR… so of course, I have to meet it and beat it! (well…try at least).

We’ve kept in touch, and he invited me out to Kong Fest where I had an incredible time! What intrigued me about the event was it revolved around the “heavy” side of CrossFit, so it was right up my alley. I don’t do WODs that often because they’re generalized. I go off percentages and movements that would benefit the sport that I am training for.  When I am actively competing in Jiu-Jitsu, any weightlifting I do is entirely sport-specific.

What are your current goals – personally and/or professionally?

Professionally, my friend Joey Bozik and I just started a non-profit: “We Defy Foundation.” It was just recently approved as a 501c3, providing Jiu-Jitsu and Strength training for physically disabled veterans. This is something that can be done on a daily basis, which we hope will help prevent veteran suicide. Statistically, we lose 22 veterans daily to suicide; it is an epidemic.

We are in the very infant stages still and getting everything structured, but I am very excited about this project.

There’s a mini documentary on YouTube which sparked the idea, here is the link. I highly encourage everyone to see what true courage, drive and unrelenting will looks like…I promise you this, any athlete that watches it has absolutely no more excuses not to train.

As for personal goal, I would like to quad gold in 2 different disciplines in the same year: Masters World Championships and Pan-Ams in both Jiu-Jitsu and Weightlifting. After that…see how many times I can do it again and see how many athletes I can train to do it as well.

Where can people go to find you

Our non-profit site is not up yet but will soon be at www.WeDefyFoundation.com

Thank you, Iron Athlete, August Schmidt, and Jo Hsu for giving me an opportunity to be on your blog!