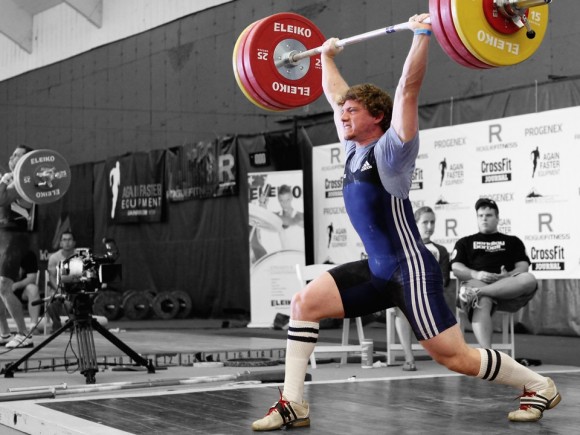 What brought you to the sport of weightlifting, and can you talk a bit about your early years in training?

I played football throughout junior high and high school. In my sophomore year, a young coach joined our school, and he was interested in using more of the Olympic lifts. We did a little here and there from sophomore through senior year. Shortly after my football season, he wanted me to do a weightlifting competition. That was where I met Richard Flemming, who’s been my coach and mentor ever since. He took me under his wing and I started lifting for his club. I’ve been with him since 1998.

Having seen weightlifting transform through the introduction of CrossFit, what are the major differences you see in the sport between when you started and now?

Just in general, people are more aware of and know about what I do. Also, I now have a much bigger community—most of the people I know and most of my friends are now CrossFitters. Before, nobody really knew who I was—or knew about any good weightlifter. When people asked me what I did and I answered Olympic-style weightlifting, they’d ask how much I bench pressed… then I’d have to get into how I didn’t bench, why I didn’t bench..

As for weightlifting in general, CrossFit has contributed so much to the growth and membership of USAW. The amount of people that are now competing, taking part in national championships, etc, has multiplied dramatically.

Do you think we’ll see a day when athletes can choose to pursue Olympic weightlifting over other conventional sports (like a college football career?)?

I think that’s a possibility for sure, especially with the amount of people who are getting exposed to weightlifting. I have 3-4 kids who’ve been doing weightlifting for a long while now, and one of them just does weightlifting. Several of them chose to just do weightlifting as opposed to football or any other high school sports. That wasn’t even my recommendation. The girl whom I work with—she stayed with several sports through high school, and that’s actually what I’d recommend.

I think that was one of the advantages that I had coming in—even though I started weightlifting a bit later. I did other sports while I grew up, which allowed me to be a more complete, well-rounded athlete.

Tell me about the CrossFit Weightlifting Advanced Trainers Course. What priorities did you have in developing the course? Does it address some of the specific requirements that CrossFit places on the sport (high reps, for-time, etc.)

I was the lead developer on the Advanced Trainers Course. It mostly stemmed from what I was doing with my own seminar, but also evolved from that. When we developed it into a two-day course, I was able to build on what I was already doing. I had the help of Coach Burgener and Beau Burgener as well as Amy Taylor and my wife, Jodi.

The first thing we needed was for the seminar to progress from the CrossFit Level 1 Certification, and from the CrossFit Beginning Weightlifting Course. On top of that—what I learned from teaching a lot of CrossFitters about weightlifting—I knew that if I wanted to help these people as best as I could, I would have to learn about the other movements that they’re doing in CrossFit. There were certain faults that kept happening and staying there, and I realized that we were spinning our wheels because folks were doing either low weight, high rep Olympic lifts, or they were doing something with their muscle-ups, pull-ups, pushups, etc. So that’s what this course is about—making sure everything is working together as much as possible.

It’s still very much a weightlifting course—we go into the technique of the pull, the squat, receiving your clean and snatch, etc.—but we also incorporate recommendations for what to look out for in other movements, and how to teach some of the other movements. We also have a number of breakout sessions to help with that as well.

Having traveled to many CrossFit gyms, do you see any trends you would like to change in how most gyms approach weightlifting?

I think that CrossFit in general has a solid approach to weightlifting—even at the Level 1. When I was developing the Advanced Trainers Course, I went to observe a Level 1. I’d already been L1 certified, but I went for a refresher and I paid attention to how they taught the Olympic lifts. Their methods gave me more efficient methods than what I was doing before. And I also used a lot of tools from the Beginner Weightlifting Course with the Burgener Warm-up and the skill transfer exercises.

Now that we have the advanced course, we talk more about how to assess and optimize movements—from the Olympic lifts to burpees, pull-ups, etc.—how do we optimize these movements to find faults in the snatch and the clean and jerk, and how do we cue them to make improvements.

In terms of coaching within the CrossFit community, I think the bigger thing to watch out for is the temptation to cue or coach the same way for every person. The L1 and the Advanced Course will teach one specific technique, but we also look at every individual as an individual. We try to improve positions on an individual basis, using individualized cues. There are some coaches that use the same cues for everybody, and I’d advise them that experimenting and individualizing those cues is really the best way to get the most out of it.

I know you have a connection with Fringesport equipment—when and how did that relationship happen?

Oh man, it’s been a while now. It was probably late 2011 or early 2012. I met Peter Keller, who’s the owner of FringeSport. He approached me with the idea of collaborating to make some equipment. We’ve been very detailed with the work that we’ve done. We took our time to come out with a bar and plates that we were happy with, and right now we’re in the process of working out other equipment and coming out with a higher quality bar.

What are your current goals, as an athlete, coach, and/or gym owner?

I think my main priority right now is coaching and really continuing to improve myself as a coach. I’m always looking for better methods, different information, new resources. I’m always learning so much from the athletes with whom I work, and I learn something at every course that I teach. In addition to being the best coach I can be, I also want to help make the course the best it can be. I’m continually working on the handout, which I know is a great help to people. I’m also always trying to improve the content.

I still definitely have ambitions and goals in weightlifting as well, and I do a lot of CrossFit right now (not trying to be a competitor necessarily). I am a Masters weightlifter for the first time this year. I would love to break records and world records, and to try to be a World Champion. That would be very, very meaningful to me after all these years of training. Honestly, though, that’s all secondary to coaching.

I post fairly regular content on Instagram @OlyChad, and I have a good number of demo videos on YouTube. That hasn’t been updated lately, but I’m currently in the process of working with a couple guys to get more content out there.

People can also check out my equipment at FringeSport.com.

The Advanced Course information is at www.crossfitweightlifting.com.