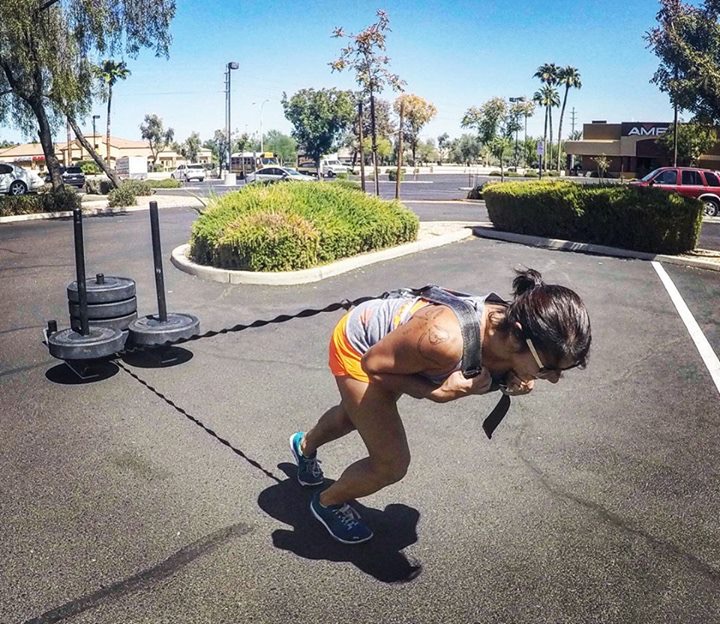 Some sports (and professions) require athletes to switch quickly between strength-based and endurance-based tasks. One way to address this demand in training is to blur the lines between strength and conditioning. This can be accomplished by integrating the sled with running and/or other movements.

Determining Load
For an explanation of loading, please refer to previous article:  “9 Conditioning Workouts for the Sled”

Combining Sleds & Running
In this workout, you alternate between sled push shuttles and shuttle runs. The runs are twice as long as the sled push; this makes it so that the shuttle run concludes back at the sled. This workout is based on a 1:1 work:rest ratio, which can be accomplished by alternating rounds with a partner or timing your work and taking an equivalent rest.

The effect of this workout can be changed based on the amount of weight used on the sled. A lighter sled will result in a faster workout, but may fail to achieve the strength stimulus of a heavier sled.

Set your objective prior to beginning the workout and choose a weight that will allow you to accomplish that objective. One example of selecting an objective would be: “to complete the workout without walking while pushing the sled.” It’s not unusual to be able to run the sled for the first portion of the workout and then break down to a walk. This isn’t necessarily a bad thing; you’re still placing significant stress on your cardiovascular system, and this type training can be useful practice for completing heavy work under fatigue or for having to run after completing strength work.

There are an infinite number of ways to structure the work when combining the sled with running.

The following is similar to the above workout, but with an emphasis on covering more ground, largely through more running. 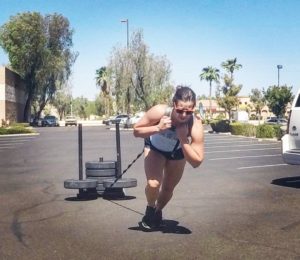 You can make things even more interesting by including a third element: calisthenics!

Don’t forget to include the rower! 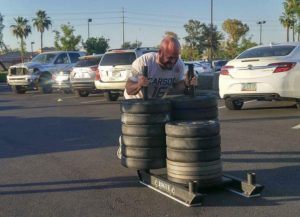 For load:
15yd Sled Push
(rest as needed. Add weight each set. Continue until unable to complete the distance without walking) 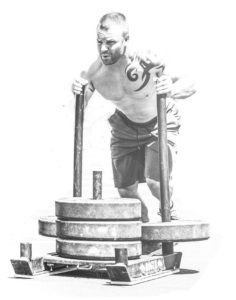 This is another animal entirely. The focus shifts toward speed, which creates greater demand for recovery between efforts. Sprinting with the sled can also be rougher on your body than slower pushing. By increasing the speed, we are recreating much of the impact and force that occurs when sprinting. This type of training will typically lead to some soreness, and will have more impact on the athlete’s ability to train at a high intensity in the near future.

Performing Sled Sprints
The use of sleds for speed training is rapidly gaining popularity. This is particularly true for field sports that involve significant contact. There are two primary reasons behind this increase in popularity.

1. Sleds keep the athlete in the “Drive Phase” of a sprint.

2. Sleds are great for increasing the capacity to generate horizontal force.

This is unique because most strength training is dependent on the vertical pull of gravity—take, for example, the squat. When performing a squat, the bar is resting across the athlete’s shoulders and the barbell is being pulled straight down by the force of gravity. Training to develop strength by generating vertical force does translate into an increased ability to generate horizontal force, but it is probably not as efficient as training by exerting force in the horizontal plane

The Force of Gravity
Training to develop strength by generating vertical force does translate into an increased ability to generate horizontal force, but it is probably not as efficient as training by exerting force in the horizontal plane.

The load used in a sled speed workout can be looked at in two ways.

1. Load should be very light (approximately 10% of body weight). The lighter load will allow the athlete to move quickly and replicate more closely the movements of sprinting. This falls into
the dogma of train fast be fast, train slow be slow. This is the traditional view and is often being disregarded by many sports performance coaches.

2. Load should be heavy. This builds strength and allows the athlete to replicate the drive phase of sprinting. This follows the belief that developing absolute strength is a crucial
and oft-neglected component of speed.

Sprint Relay Workouts
Relays are an efficient way to manage large groups of athletes. It is vital that we respect the time of the athletes that we coach. It is not acceptable to waste their time due to a lack of creativity or a lack of planning.

For example, you have 5 sleds and 25 athletes to run through a training session. The least-efficient way to manage the training session would be to have one athlete working on a sled at a time.