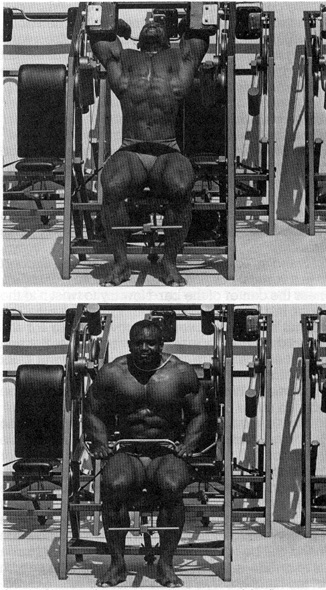 The concept behind The Pre-Exhaustion Method is as follows, during a compound exercise (multiple joint), the larger muscle groups are not completely taxed, this is due to the limited work capacity of the smaller muscle groups involved in the movement.

For Example, during a Lat Pulldown, the biceps fail prior to the much larger lat muscles, thus limiting the training stimulus received by the lats. Pre-Exhaustion addresses this dilema by fatiguing the stronger muscle group with a single joint movement prior to completing a mutiple joint involving the Pre-Exhausted muscle group.

1-3 sets:
Each exercise to failure. No rest between exercises.
8-12 Machine Pullover
8-12 Supinated Pulldown
(rest 1:30 between sets)

Pre-Exhaustion can also be used to develop improved capacity while working under fatigue. An example of this woud be to perform Machine Pullovers followed immediatly by Bar Muscle-ups.